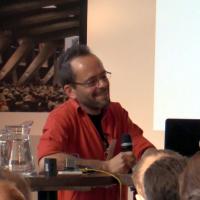 Rob van Ede is a physical geographer who is working with with TNO – Geological Survey of the Netherlands (January 2012 - present). He has experience in field research, modeling, spatial IT and data harmonization and has worked both in the Netherlands and Australia. Rob’s current assignment includes data analysis, conceptual data modeling, data harmonization and project management for TNO – Geological Survey of the Netherlands. Furthermore, he is participating in international projects on data harmonization such as the Ocean Data Interoperability Platform (ODIP) and active as facilitator for the INSPIRE Energy Resources thematic cluster. In the past, he has worked on different environmentally related subjects such as: satellite remote sensing of soil moisture, coastal water quality and coral bleaching, conceptual modeling of geotechnical and geological surveys, modeling of oil and gas production, harmonization of geodata at the Dutch national airport and spatial software development and data analysis for local Dutch municipalities. Apart from his work in geography, Rob has had an interest in sound reproducing technology for a long time. He spent a lot of evenings during his study working as (licensed) film projectionist and sound technician in a movie theater, and has been designing and building high-quality loudspeakers for many years, something that eventually led to the founding of Throb Audio, a small company that specializes in the design of high-quality loudspeakers and live sound recordings. Rob is also an outdoor sports enthusiast and avid bicycle user, using the bike for commuting as much as possible and sometimes for more serious expeditions; in 2012 he embarked on a solo bike-trip that brought him from Ulm (Germany) to Istanbul (Turkey) in five weeks and a folding bicycle trip from Mumbai to Goa (India) in 2015. He also holds a paragliding pilot license, giving him the freedom to fly through the air under his own wing when the conditions are right.