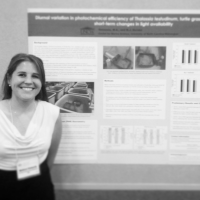 Melissa Genazzio joins the NEON team as the Staff Scientist for SAVI-CoopEUS. She is an East Coast Transplant, saying a bittersweet farewell going from sea to summit. Melissa earned her M.S. at the University of North Carolina Wilmington, where she studied variation in photochemical efficiency of Thalassia testudinum in response to repeated shading events using PAM fluorometry in Florida Bay. There she worked with Florida Fish and Wildlife to extrapolate mesocosm and in situ data over large spatial and temporal scales. Melissa has contributed to a multitude of projects relating to biological science, informatics, food science, biodiversity and ecosystem relationships, and anthropogenic impacts. Her diverse skillset includes operations, management, outreach, and community engagement to compliment her technical abilities. Melissa has worked in a wide range of institutions including, Bermuda Institute of Ocean Sciences, University of Rhode Island, Marine Biological Laboratory at WHOI, Gulf of Maine Research Institute, LUMCON, Mote Marine Laboratory, and The National Science Foundation. Prior to joining NEON, Melissa was a Biological Science Coordinator at NASA working on the Common Metadata Repository and Global Change Master Directory.