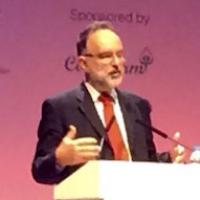 Andre Laperriere Executive Director Global Open Data for Agriculture and Nutrition (GODAN) Mr. André Laperrière joined the Global Open Data for Agriculture and Nutrition (GODAN) initiative as its first Executive Director, in September 2015. During his career, Mr. Laperrière has led/managed numerous projects on behalf of large Private Corporations and subsequently, within the United Nations and the World Bank. In this context he played a senior role in the design and the implementation of major reforms within a number of agencies such as the International Criminal Court (ICC), the World Health Organization (WHO) and UNICEF. He has extensive work experience in the Americas, Caribbean, Africa, Europe and the Middle East, in particular in developing countries and in conflict/post conflict environments. Before joining GODAN, Mr. Laperrière was Deputy Chief Executive Officer at the Global Environment Facility (GEF) in Washington DC. Among other positions, he has also been the first Executive Director of the Trust Fund for Victims at the International Criminal Court (ICC), Director of the Administration and Finance Division in the World Health Organization (WHO), and Coordinator for reconstruction and rehabilitation activities under the responsibility of UNICEF in Iraq. Prior to his career in the UN, Mr. Laperrière was Director in the International Services of Price Waterhouse. In this position, he led multiple large scale business evaluations, privatizations, mergers and structural reform projects in Europe, Africa, the Americas and Caribbean. Mr. Laperrière was born in Canada, where he completed post graduate studies in Administration and in Industrial Relations. Mr. Laperrière is an expert in international development.