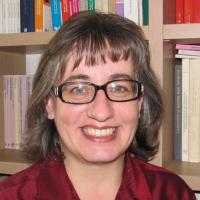 Silvia Calamai (Firenze, 1973) is Associate Professor in Linguistics at the University of Siena. She received her degree in 1997 (mark: 110L/110) from the University of Florence (Facoltà di Lettere e Filosofia), and in 2001 her PhD in Romance Philology and General Linguistics from the University of Perugia (with honours). Her main research interests are experimental phonetics, sociolinguistics, sound archives and dialectology. She has been short-term lecturer at the universities of Florence, Pisa, Siena and Macerata, where she taught Linguistics, Dialectology, and Academic Writing. Since 2005/2006 she has taught Linguistics at the Facoltà di Lettere e Filosofia di Siena-Arezzo (since 2008, as a tenure-track lecturer/ricercatore). She has held lectures and seminars as an invited speaker on experimental phonetics, sociolinguistics, and languages of the performing arts at the Universities of Pisa, Florence, Naples (Federico II), Modena and Reggio Emilia, Bologna (Forlì), Basel, Copenhagen, Oxford, Salamanca, at the Accademia della Crusca and at the Scuola Normale Superiore. In 2004 she placed second in the competition for full professorship in Italian Linguistics at the Philosophisch-Historische Fakultät of the University of Basel. From 1998 to 2008 (first with a fellowship, and subsequently as a post-doc researcher) she conducted acoustical, perceptual and articulatory research on vowel systems at Linguistics Laboratory of Scuola Normale Superiore, where she was head of the project Dati acustici e articolatori: relazioni e prospettive funded in 2005 under the Giovanni Ricercatori/Young Researchers programme. In the last ten years she has been taking part to five national projects (PRIN): AGAM (Atlante Generale dell’Alimentazione Mediterranea); AVIP (Archivio Vocale di Varietà dell’Italiano Parlato), API (Archivio di Parlato Italiano); IPAR (Italiano Parlato); Acquisizione linguistica e variazione (diacronica e diatopica); Principi e strategie di organizzazione sistemica. She held a one-year grant (fellowship) at the Accademia della Crusca (2001). She received a grant from NATO and from the International Speech Communication Association in order to participate to the Advanced Study Institute 2002 (ASI2002) Dynamics of Speech Production and Perception. She has done etymological analysis of dialectal lexicon at the Italian unit of the Atlas Linguarum Europe (1995-97). She was in the organizing committee of the International Workshop “Sociophonetics, at the Crossroads of Speech Variation, Processing and Communication”, December 14-15, 2010, Pisa, Italy. She has been member of the Core expert group "Research and Scientific Collections" in the Presto4U project (FP7, 2013-14 - Presto Center Foundation) and the scientific co-ordinator of the Project Grammo-foni (Gra.fo) “Le soffitte della voce” (Par-Fas Regione Toscana 2010-2013) at University of Siena. At present, she is associate member of The Intellectual Property Issues in Cultural Heritage (IPinCH) project (Simon Fraser University, Canada) and member of CLARIN-IT. Her work has been published in various peer-reviewed journals, refereed conference proceedings, and collective volumes. In addition to over 100 scholarly contributions and two manuals for university students (Suoni e forme, 2008; Introduzione alla sociofonetica, 2015), she has written four books based on phonetic and dialectological fieldwork.