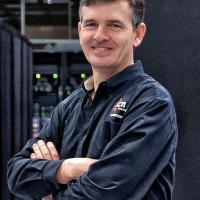 PhD in Computer Science from the Technical University of Catalunya (Universitat Politècnica de Catalunya, UPC). Graduated on Computer Science at the Facultat d' Informàtica de Barcelona (UPC). Lecturer and researcher at the Computer Architecture Department (DAC) at the UPC from 1994 to 2000. In 2000, joint EASi Engineering as R&D Director, with the responsibility of running the Spanish office of the company and the full development of ST-ORM. In 2004 he started to work for the Spanish Ministry for the preparation of MareNostrum and its installation. Operations Director at BSC since 2005 and responsible for MareNostrum operations and coordination of the Spanish Supercomputing Network. Since 2010, member of the Board of Directors of PRACE AISBL and Chair of this Board from 2010 until 2011.