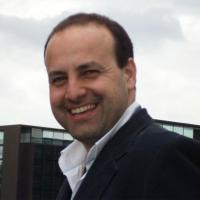 Pedro Príncipe is an information specialist working at University of Minho Documentation Services on the Open Access Projects Office, on OpenAIRE2020, FOSTER and RCAAP projects. In OpenAIRE2020 project he is working as support and helpdesk manager and participating in the guidelines team and other technical tasks, as the usage statistics and the funder information services. He also had participation in several FP7 projects related with Open Access and repositories: NECOBELAC, OpenAIRE, MedOANET and OpenAIREplus. Graduated in New Communication Technologies and with training in information science and documentation, he previously worked during ten years as librarian and web content manager at University of Aveiro. He has been involved in COAR Working Group on Repository Interoperability, and acting as member of the COAR Controlled Vocabularies Editorial Board. He is Coordinator of the Academic Libraries working Group of the National Executive Council of the Portuguese Association of Librarians, Archivists and documentalists (BAD) since 2014.

Education and Training on Handling of Research Data IG