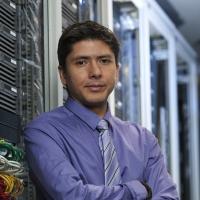 Dr Raul Palma is the coordinator of Semantic Technologies in the Network Services division at Poznan Supercomputing and networking Center (www.man.poznan.pl). He received his PhD in artificial intelligence (Cum Laude), with Ontologies and Semantic Web as main subject, from Universidad Politecnica de Madrid UPM (Spain) in 2009. He also holds a MsC in Information Systems (Cum Laude), with Database and Decision Support Systems as main subject, from Universidad Francisco Marroquin (Guatemala). His research expertise and experience include provenance and evolution, preservation of data and methods, ontology engineering and semantic technologies, open and linked data, complex software architectures and cloud computing. He has more than 10 years of experience in research and development projects at regional and international level. Since joining PSNC in 2009 he has led R&D activities and the participation of the center in different projects with focus on the application of his research expertise in multiple fields, including telemedicine, bioinformatics, astronomy, earth science and agriculture. His work on these projects include also the leading role in PSNC during project conceptualisation and proposal preparation, the specification of software architectures, design and definition of APIs, software integration, testing and deployment, and the management of a team of software engineers and developers. Before PSNC, he worked at the Ontology Engineering Group (OEG) from UPM (Spain) as a researcher, where he contributed in different projects