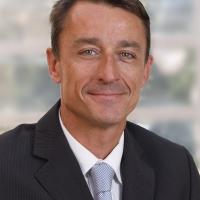 54 years old and since 30 years in the electro technical market, Emmanuel FRANCOIS insures since 2009 the promotion of EnOcean (Wireless and Battery less RF Standard) on West Europe. At this regards, he is also in charge of the Business Development of the EnOcean Alliance in Europe (over 350 members in the world). Smart Building has always been a focus in his career. Today as Sales Manager West Europe of EnOcean since EnOcean technology has its place in every Building and is becoming the “blue tooth” of the Smart Building. Previously he was General Manager of Wieland Electric France from 2004 to 2009, Sales Manager of Capri (Cooper group) from 2002 to 2004 and Sales Manager by Soulé (ABB group) from 1997 to 2001. This is by Merlin Gerin (Schneider Electric), in 1991, that he first started promoting Smart Building Solutions as Key Account Manager Emmanuel FRANCOIS has always been active in various committees for the promotion of a complete sector. Few years ago he created in the framework of Gimelec the Photovoltaic Commission and two years ago he created with Mr. Serge Le Men (CEO Newron System) the Smart Building Alliance for Smart Cities (over 80 members), as President, in order to connect all players of this field, coming from Energy, IT or Building Control. Main focus is to promote a concept of Smart Building linking all the different players with transverse application for a clear, concerted and homogeneous development.