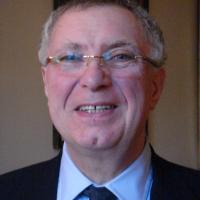 Renaud Fabre, born in 1949 (à Paris), is Professor of the Universities in Economics and former President of The University of Paris VIII (Vincennes Saint Denis). Graduate from Science Po Paris section "Public Service"), he passed his Ph D at Sorbonne in Economics. He taught at École polytechnique, at École nationale de la statistique et de l'administration économique, at Paris VIII, and at l'Institut d'études politiques de Paris. Between 2001 and 2013, Renaud Fabre specialized in evaluation and control of public policies in fields of education and higher education at French equivalent of GAO (Cour des comptes). He has been also (2009-2013), Chairman of French delegation to ISO in the field of technologies of information for education (ISO/JTC1/SC36). Between 2009 and 2011, he has been responsible of the strategy of Regions for higher education and research at national Association of Regions of France. Since June 2013, Renaud Fabre is director of scientific and technical information of National Center for Scientific Research (CNRS)