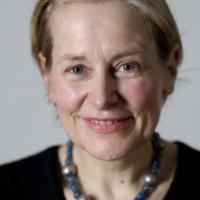 In 1973 I began research in the Department of Plasma Physics and Controlled Fusion of the 'Commissariat à l'Energie Atomique (CEA)'. In 1977 I received a Master in engineering from Stanford University, in 1980 a PhD in physics from 'Université Paris VII', and in 1987 a PhD in mathematics from 'Université Paris VI'. In 1982 I joined the 'Centre National à la Recherche Scientifique (CNRS)', where I am 'Directrice de Recherche', working in the 'Laboratoire de Météorologie Dynamique (LMD)' at 'Ecole Normale Supérieure (ENS)' in Paris. My research subject is at the interface between applied mathematics, physics, and computational sciences. It concerns modeling and numerical simulation of nonlinear partial differential equations, in particular the Navier-Stokes equations in the fully nonlinear regime. My aim is to understand the nature of turbulence in order to improve its prediction. For this, I developed new statistical analysis, compression and simulation methods, based on the wavelet representation, in order to better analyze, model and compute turbulent flows. The main applications are in meteorology, oceanography, astrophysics, aerodynamics, environmental sciences and plasma physics. I am involved with several international collaborations (in Japan, United States, Canada, Brazil, India, Australia and within Europe), in particular within the framework of the ITER (International Thermonuclear Experimental Reactor) project. I taught different courses of physics and mathematics in several countries (United States, India, China, Brazil, Japan, Turkey and within Europe). I published about 300 papers (out of which 96 are in peer-reviewed journals, 112 in conference proceedings and 40 in books). When I was member of the Ethics Committee of CNRS (2008-2011), I wrote in 2011 the recommendation concerning the relations between scientists and publishers. Following this work, in 2012 with 33 mathematician colleagues we launched a boycott of Elsevier and succeeded to stop the 'Research Work Act'. We are now working to propose open access models for publishing papers, codes and data. Our aim is to recover control of our publications, journals, softwares and databases, with the help of publishers as service providers but no more as content owners.