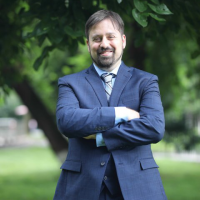 Anthony Bak Buccitelli is Associate Professor of American Studies and Communications at the Pennsylvania State University. He holds a Ph.D. in American and New England Studies from Boston University and an M.A. in Folklore from the University of California, Berkeley. He currently serves as Director of the Penn State's Center for Folklore, as editor of the journals Western Folklore and SOAR: The Society of Americanists Review. He has previously served as co-editor of Cultural Analysis: An Interdisciplinary Forum on Folklore and Popular Culture from 2006-2014. Buccitelli is the author of the book City of Neighborhoods: Memory, Folklore, and Ethnic Place in Boston (2016, University of Wisconsin Press). This volume was selected for the Andrew W. Mellon Foundation-supported Folklore Studies in a Multicultural World Series, and received honorable mention for the American Folklore Society’s 2016 Wayland D. Hand prize, “given for the best book combining historical and folkloristic methods and materials.” He is also editor of Race and Ethnicity in Digital Culture Our Changing Traditions, Impressions, and Expressions in a Mediated World (2017, Praeger Books), a two volume edited collection that explores the role of folklore in the changing definitions, practices, and performances of race and ethnicity in the digital age. He has published more than 20 research articles and scholarly book chapters, which have appeared in the Journal of American Folklore, Oral History, Culture and Religion, Cultural Analysis, and Western Folklore, among other venues. Buccitelli’s research centers on vernacular culture and communication, in connection with digital technology, memory, narrative, space and place, and race and ethnicity. He regularly teaches and lectures on topics in technology and culture, folkloristics, ethnography, and race and ethnicity. Professional Portfolio: https://anthonybakbuccitelli.wordpress.com Academia: https://pennstate.academia.edu/AnthonyBuccitelli