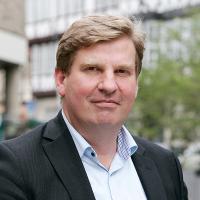 Sören Auer is professor for Data Science and Digital Libraries at Leibniz University of Hannover and director of TIB German National Library of Science and Technology. Sören has made substantial contributions to semantic web technologies, knowledge engineering, software engineering, as well as databases and information systems. Sören is author (respectively co-author) of over 100 peer-reviewed scientific publications. He received several awards, such as the ESWC 7-year best paper award or the OpenCourseware Innovation award. He led / is leading several large-scale collaborative research projects such as the European Union’s H2020 flagship project BigDataEurope. Sören is co-founder of several high-impact research and community projects such as the Wikipedia semantification project DBpedia, the OpenCourseWare authoring platform SlideWiki.org or the scholarly communication metadata platform OpenResearch.org. The technology Sören develops with his team fuels many industrial applications. He is organiser, programme or track co-chair of renowned conferences and workshops, including OKCON 2010, ESWC 2010, ICWE 2011, WWW 2012, European Data Forum. He serves as an expert for industry, the European Commission, the W3C and board member of the Open Knowledge Foundation.