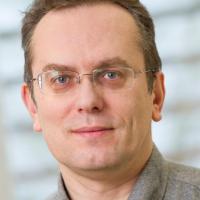 Dr. Igor Tetko received his MSc from Moscow Institute of Physics and Technology (summa cum laude - red diploma), which was one of the top-ranked Universities in the Soviet Union (analog of MIT at the USA). He did his postdoctoral study at the University of Lausanne in neuroinformatics where he developed algorithms for analysis of EEG data, synfire chains, theoretical modeling of thalamo-cortical organization of brain. Since 2001 Dr. Tetko is at Helmholtz Zentrum München, where he is a group leader in Chemical Informatics. He was the coordinator of Marie Skłodowska-Curie Innovative Training Network European Industrial Doctorates “Big Data in Chemistry” (http://bigchem.eu), which provided training in development and application of new machine learning algorithms in chemistry and life sciences. Dr. Tetko co-authored >200 publications in chemoinformatics, bioinformatics, neuroinformatics and machine learning. Since 2016 he is on the list of the Most Cited Researcher in Computer Sci. & Eng. (http://www.shanghairanking.com). In 2006 and 2011 Dr. Tetko received national awards (GO-Bio) for his methodological developments, which are the basis of the machine learning methods and software offered by BIGCHEM GmbH. He was a General Chair of International Conference on Artificial Neural Networks (ICANN2019)