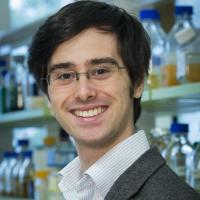 Research My background is in enzymology and protein engineering using directed evolution, specialising in the study of evolvability. I now use a variety of phylogenetic and non-phylogenetic methods to investigate the early evolution of protein superfamilies. Some of these are traditional large proteins (e.g. proteases and glycosyltransferases), whereas others are small and disulphide-rich (e.g. defensins) or proline-rich and heavily post-translationally modified (e.g. arabinogalactan proteins). I've been involved with investigating the origins of protein structures, evolution of new functions, evolvability, robustness, and convergent evolution. I also develop specialised methods for dissecting the evolutionary history of small, or repetitive proteins. Understanding the principles and details of how these proteins evolve is enabling us to begin to engineer them for human applications (current focus on antibiotic alternatives) Scientific communication In addition to my research, I have an interest in scientific communication. In particular I work to bring scientific content in Wikipedia up to academic standards, since it is typically the most read information source for most topics. This is firstly through directly editing the encyclopedia (articles I've written or overhauled have >30 million views per annum). Additionally, I am part of a new wave of collaboration between academic publishers and Wikipedia. I am a Front Section Editor for PLOS Genetics and an Editor-in-Chief of WikiJournal of Science.