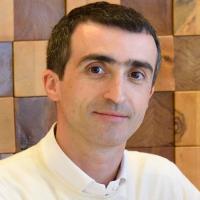 Octavian Gordon is a PhD in Classical Studies, with a thesis in Philology on Lactantius’ De mortibus persecutorum (2007, under the supervision of Prof. Dan Slușanschi). He currently teaches Old Greek and Latin at the University of Bucharest. He has been a scholarship holder and fellow for PhD and postdoctoral research of several European Universities, such as Fribourg (scholarship holder of the Swiss Confederation, under the supervision of Prof. Jacques Schamp), Berlin (both Freie Universität and von Humboldt), Salonica, Münster (under the supervision of Professor Georgios Makris) and Bucharest. As a fellow of the New Europe College – Institute for Advanced Study in Bucharest, he participated in the translation into Romanian of the Septuagint and in other translation projects, especially from the biblical and byzantine literature. He has attended more than 40 scientific conferences and he is a member of many academic organizations. He is a National Correspondent for Romania and member in the Scientific Council of the International Association of Patristic Studies. He was appointed General Director of the National Library of Romania for a short period of time (June 2016 – May 2017).