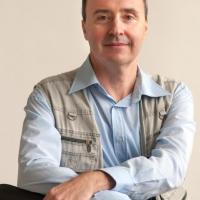 http://www.aut.upt.ro/~rprecup/ Radu-Emil Precup (M IEEE '03 - SM IEEE '07) was born in Lugoj, Romania, in 1963. He received the Dipl.Ing. (Hons.) degree in automation and computers from the "Traian Vuia" Polytechnic Institute of Timisoara, Timisoara, Romania, in 1987, the Diploma in mathematics from the West University of Timisoara, Timisoara, in 1993, and the Ph.D. degree in automatic systems from the "Politehnica" University of Timisoara, Timisoara, in 1996. From 1987 to 1991, he was with Infoservice S.A., Timisoara. He is currently with the Politehnica University of Timisoara, Romania, where he became a Professor in the Department of Automation and Applied Informatics, in 2000, and he is currently a Doctoral Supervisor of automation and systems engineering. He is also an Adjunct Professor within the School of Engineering, Edith Cowan University, Joondalup, WA, Australia, and an Honorary Professor and a Member of the Doctoral School of Applied Informatics with the Óbuda University (previously named Budapest Tech Polytechnical Institution), Budapest, Hungary. He is currently the Director of the Automatic Systems Engineering Research Centre with the Politehnica University of Timisoara, Romania. From 1999 to 2009, he held research and teaching positions with the Université de Savoie, Chambéry and Annecy, France, Budapest Tech Polytechnical Institution, Budapest, Hungary, Vienna University of Technology, Vienna, Austria, and Budapest University of Technology and Economics, Budapest, Hungary. He has been an Editor-in-Chief of the International Journal of Artificial Intelligence since 2008 and he is also on the editorial board of several other prestigious journals including IEEE Transactions on Fuzzy Systems, IEEE Transactions on Cybernetics, Applied Soft Computing (Elsevier), Evolving Systems (Springer) and Cogent Engineering (Taylor & Francis). He is the author or coauthor of more than 300 papers published in various scientific journals, refereed conference proceedings, and contributions to books. His research interests include mainly development and analysis of new control structures and algorithms (conventional control, fuzzy control, data-based control, sliding mode control, neuro-fuzzy control, etc.), theory and applications of soft computing, computer-aided design of control systems, modelling, optimization (including nature-inspired algorithms), and applications to mechatronic systems (including automotive systems and mobile robots), embedded systems, control of power plants, servo systems, electrical driving systems. Prof. Precup is a corresponding member of The Romanian Academy, a member of the Technical Committee (TC) on Virtual Systems in Measurements of the Institute of Electrical and Electronics Engineers (IEEE) Instrumentation & Measurement Society, the Task Force on Autonomous Learning Systems within the Neural Networks TC of the IEEE Computational Intelligence Society, the Subcommittee on Computational Intelligence as part of the TC on Control, Robotics and Mechatronics in the IEEE Industrial Electronics Society, the Task Force on Educational Aspects of Standards of Computational Intelligence as part of the TC on Standards in the IEEE Computational Intelligence Society, the TCs on Computational Cybernetics and Cyber-Medical Systems of the IEEE Systems, Man, and Cybernetics Society, the International Federation of Automatic Control (IFAC) Technical Committee on Computational Intelligence in Control (previously named Cognition and Control), the Working Group WG 12.9 on Computational Intelligence of the Technical Committee TC12 on Artificial Intelligence of the International Federation for Information Processing (IFIP), the European Society for Fuzzy Logic and Technology (EUSFLAT), the Hungarian Fuzzy Association, and the Romanian Society of Control Engineering and Technical Informatics. He was the recipient of the Elsevier Scopus Award for Excellence in Global Contribution (2017), the "Grigore Moisil" Prize from the Romanian Academy, two times, in 2005 and 2016, for his contribution on fuzzy control and the optimization of fuzzy systems, the Spiru Haret Award from the National Grand Lodge of Romania in partnership with the Romanian Academy in 2016 for education, environment and IT, the Excellency Diploma of the International Conference on Automation, Quality & Testing, Robotics AQTR 2004 (THETA 14, Cluj-Napoca, Romania), two Best Paper Awards in the Intelligent Control Area of the 2008 Conference on Human System Interaction HSI 2008, Krakow (Poland), the Best Paper Award of 16th Online World Conference on Soft Computing in Industrial Applications WSC16 (Loughborough University, UK) in 2011, the Certificate of Appreciation for the Best Paper in the Session TT07 1 Control Theory of 39th Annual Conference of the IEEE Industrial Electronics Society IECON 2013 (Vienna, Austria), a Best Paper Nomination at 12th International Conference on Informatics in Control, Automation and Robotics ICINCO 2015 (Colmar, France), a Best Paper Award at 7th International Conference on Information Technology and Quantitative Management ITQM 2019 (Granada, Spain), and was listed as one of the top 10 researchers in Artificial Intelligence and Automation (according to IIoT World as of July 2017).