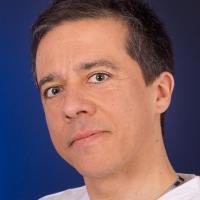 Nicolas Fressengeas graduated from Supélec in France in 1993 from which he got a French engineering diploma (diplôme d'ingénieur). After serving for one year as a scientific consultant in the French army, he earned a PhD in 1997 from the university of Metz, in France, in the field of non linear optics. He was a researcher in Supélec from 1998 to 2004, during which he was habilitated, in 2001, do direct research, still in the field of non linear optics. He became full professor in the university of Metz in 2004, which later evolved into the Lorraine university. His field of research gradually evolved from using materials for non linear optics to designing materials for optical applications, following the line of simulation and optimization, while collaborating with material specialists. He finally directed his laboratory : the optical materials and photonic systems laboratory. He directed over ten PhD theses in these research fields and wrote over 40 papers, was associated to a hundred of international conferences and published one open source software with a participant of this project. He is now missioned by the Lorraine university to design its policy towards opening science.