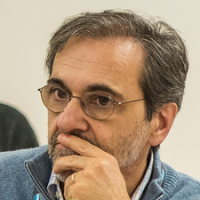 Paolo Romano graduated in Electronic Engineering at the University of Genoa, and got a PhD in BioEngineering at the Polytechnic of Milan. Since 1993, he is a researcher at the Cancer Comprehensive Center and University Hospital "IRCCS Ospedale Policlinico San Martino". His research interests have been in the field of biomedical data management since the beginning. He has been involved in researches on network standards, technologies, tools and applications in bioinformatics. He designed and contributed to the development of the Molecular Probe Data Base and of the Cell Line Data Base and its associated hypertext HyperCLDB. Recently, he contributed to the development of the Cell Line Integrated Molecular Authentication (CLIMA) Data Base. Since 1999 he is in charge of the CABRI (Common Access to Biological Resources and Information) network services offering living resources from 28 European collections. He designed and developed Biowep, the Workflow Enactment Portal for Bioinformatics. He is author of ca. 70 publications in peer-reviewed international journals. He taught academic courses "Bioimages" and "Bioinformatics" at the University of Genoa. He was the creator of Network Tools and Applications in Biology (NETTAB) workshops that are running annually since 2001. He participated in many Programme Committees and has been a referee for many International journals. He currently is Associated Editor BMC Bioinformatics. He is member of the International Society for Computational Biology (ISCB) from 2001 and of the Bioinformatics Italian Society (BITS) since its foundation. He was member elected of BITS Steering Committee for the periods 2008-10, 2010-12 and 2012-14. From 2010 to 2012 he has been Secretary of BITS.