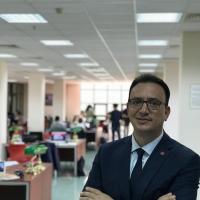 Gültekin Gürdal Gultekin Gurdal was graduated from Hacettepe University Library Science Program (currently the Information Management Program) in 1990 and completed his MBA degree from Kocaeli University. He has been continuing to be the Library Director at Izmir Institute of Technology (IYTE) since 2005. He has previously held positions at Bilkent University, The Scientific and Technological Research Council of Turkey, Sabanci University and TOBB University. He served as the Chairman of the Anatolian University Libraries Consortium (ANKOS) between the years 2008 and 2012. Currently, he serves as the Coordinator of the ANKOS Open Access and Institutional Repositories Working Group. He is recently working especially on the Open Access studies and after OpenAIREPlus project partner that was completed at the end of December 2014, he is now an OpenAIRE2020 project partner. Also, last year he was elected as one of the members of the Open Science Committee which was founded by The Turkish Scientific and Technological Research Council. He keeps active membership with the following organizations; Turkish Librarian' Association (TKD), University and Research Librarians Association (UNAK), Anatolian University Libraries Consortium (ANKOS), Ligue des Bibliothèques Européennes de Recherche - Association of European Research Libraries (LIBER), The Confederation of Open Access Repositories (COAR), The European Organisation for International Research Information (EuroCRIS), International Association of Scientific and Technological University Libraries (IATUL). He has many national and international publications. He is a close follower and practitioner of all kinds of scientific and technological development in the field of librarianship/information science.