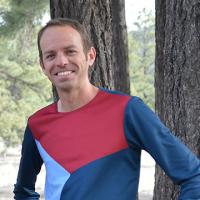 Aaron Braun is a professional runner from Fort Collins Colorado. In his hometown, he started his running career in the 7th grade. Braun obtained his education from Adams State University. He resides in Flagstaff with his wife Annika and their daughters Makenzie and Myla.

During high school, he was a mediocre runner (only had PR’s of 9:34 3200 and 4:24 1600). Aaron really burst onto the scene while running for the division 2 powerhouse Adams State where he captured 16 All American honors and 6 National titles. Aaron ran times of 13:36 (5k), 3:39 (altitude adjusted 1500), and 4:01 (mile) at Adams. He stood out as one of the schools most decorated champions at Division II powerhouse Adams State University. Aaron Braun contribute much of his foundation and success to Coach Martin and the Adams State program.

Aaron began training with the NAZ Elite team in the fall of 2016. He officially signed on in March of 2017.

Aaron Braun is one of the most versatile professional US distance runners competing today. He can compete at the highest level at just about every distance. He has PRs of 13:20.25 for 5,000m, 27:41.52 for 10,000m, 1:01:38 for the Half Marathon and 2:12:54 in the Marathon. In 2012 Braun finished 5th at the US Olympic Trials over 10,000m. In 2013 he won the US 12k National Championships and two months later ran a breakthrough half marathon personal best of 1:01:38. In 2015 he ran 2:12:54 to finish as the top American at the Chevron Houston Marathon. Unfortunately, injuries prevented him from competing in the Olympic Trials Marathon in 2016. He returned to racing with a win at the Big Sur Half Marathon in the fall of 2016. He won the Credit Union Sactown 10 miler in April of 2017 in his first race as an official member of the team. Aaron Braun has a big comeback in the fall of 2017 when he ran 2:13:41 at the Chicago Marathon where Aaron Braun was 12th overall and the 3rd American.

From Observational Data to Information IG