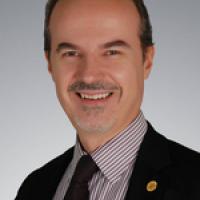 Kuvvet Atakan was born in 1957. His formal education includes a B.Sc. (METU) in geological engineering, M.Sc. in geoology (UiB) and PhD in Seismology (UiB). He is currently holding a position as Professor of seismology at the Department of Earth Science (GEO), University of Bergen (UiB). Prof. Atakan was the Vice-Dean of the Faculty of Mathematics and Natural Sciences during the period 2004-2005, Head of the Geodynamics Research Group at GEO (2003-2009) and Vice-Rector for Education (2009-2013). Prof. Atakan is a member of the Norwegian Academy of Technical Sciences (NTVA) and is the titular member for Norway in the European Seismological Commission (ESC). In 2010, Professor Atakan has been awarded as one of the Top 10 International Leaders in Norway. Professor Atakan was previously involved in more than 50 scientific projects in various geographical areas (mainly Europe, but also Central America, Africa and Asia) in the fields of seismotectonics, active tectonics, seismic hazard, local site effects, seismic monitoring and associated topics. Currently he is national coordinator of the EPOS-Norway (European Plate Observing System) Project. He is also a member of the Board of National Scientific Representatives (BNSR) of the EPOS. In addition, Prof. Atakan is a member of the Project Development Board (PDB) and Service Coordination Board (SCB) of the European ESFRI - EPOS Implementation Phase (IP) Project. Professor Atakan is the author/co-author of numerous scientific contributions, among them 104 peer-review publications in the fields of seismotectonics, earthquake hazard and risk. Currently, Professor Atakan is Associate Editor of the Journal of Seismology (Springer) and Associate Editor of Bollettino di Geofisica Teorica e Applicata. He is also a member of the Editorial Board of the Soil Dynamics and Earthquake Engineering (Elsevier Publ. Inc.). His current research interests include the processes leading to mega-thrust earthquakes in subduction zones. Professor Atakan has also a broad experience in teaching and student supervision at undergraduate and graduate level (58 students in total). Atakan was the scientist in charge of the exhibition at Bergen Museum with the topic “100th Anniversary of the Seismological Observatory in Bergen” which was held during the period 2005-2010. He has also been the Board member of the Bergen Science Center, VilVite AS during the period 2009-2013.