This joint session has the following obejctives:

1. Identify opportunities for promoting adoption of existing RDA recommendations in the agrifood sector

2. Identify the barriers in the agrifood community which need to be addressed in order have broader adoption of RDA outputs

3. Produce recommendations to the agrifood community on addressing the opportunities and barriers identified above.

Work during the session will leverage on the existing RDA outputs and adoption stories. Special attention will be given to:

NOTE - Other group involved is the FAIRsharing WG, which I could not find in the cascade menu above.

Current and future adopters of RDA outputs and FAIR principles in the agrifood sector. Researchers and practitioners authoring recommendations, standards, policies and guidelines on the use of RDA standards and outputs.

Previous knowledge of RDA outputs relevant to the agrifood sectors is appreciated.

Not applicable, this is a joint meeting of various groups (IG and WG).

Brief introduction describing the activities and scope of the group(s):

Formed in 2013, since its inception the Interest Group on Agricultural Data (IGAD) has grown in community strength to over 200 members, becoming one of the RDA’s most prominent Thematic Groups.

IGAD is a domain-oriented group working on all issues related to global agriculture data. It represents stakeholders in managing data for agricultural research and innovation, including producing, aggregating and consuming data. Beyond this IGAD promotes good practices in research with regard data sharing policies, data management plans, and data interoperability, and it is a forum for sharing experience and providing visibility to research and work in agricultural data.

One of IGAD’s main roles is to serve as a platform that leads to the creation of domain-specific Working Groups. To date, five successful Working Groups (WGs) have been formed under IGAD, these are: Wheat Data Interoperability, Rice Data Interoperability, AgriSemantics, On-Farm Data Sharing and Capacity Development for Agricultural Data WGs. The groups play an active role at the RDA Plenaries.

"Semantic Interoperability is usually defined as the ability of services and systems to exchange data in a meaningful/useful way." In practice, achieving semantic interoperability is a hard task, in part because the description of data (their meanings, methodologies of creation, relations with other data etc.) is difficult to separate from the contexts in which the data are produced. This problem is evident even when trying to use or compare data sets about seemingly unambiguous observations, such as the height of a given crop (depending on how height was measured, at which growth phase, under what cultural conditions, ...). Another difficulty with achieving semantic interoperability is the lack of the appropriate set of tools and methodologies that allow people to produce and reuse semantically-rich data, while staying within the paradigm of open, distributed and linked data.

The use and reuse of accurate semantics for the description of data, datasets and services, and to provide interoperable content (e.g., column headings, and data values) should be supported as community resources at an infrastructural level. Such an infrastructure should enable data producers to find, access and reuse the appropriate semantic resources for their data, and produce new ones when no reusable resource is available. The Agrisemantics working group aims at being a community hub for the diffusion of knowledge and practices related to semantic interoperability in agriculture, and to serve a common place where the future of data interoperability through semantics will be envisaged.

The Wheat Data Interoperability Working Group aims to provide a common framework for describing, representing linking and publishing Wheat data with respect to open standards.Such a framework will promote and sustain Wheat data sharing, reusability and operability. Specifying the Wheat linked data framework will come with many questions: which (minimal) metadata to describe which type of data? Which vocabularies/ontologies/formats? Which good practices? Mainly based on the the needs of the Wheat initiatiative Information System (WheatIS) in terms of functionalities and data types, the working group will identify relevant use cases in order to produce a “cookbook” on how to produce “wheat data” that are easily shareable, reusable and interoperable.

The FAIRsharing WG has produced one of the 12 outputs recommended by RDA, encompassing: a registry of curated and interlinked records of standards (for identifying, reporting, and citing data and metadata), databases, repositories (and knowledge-bases) and data policies (from journals, publishers, funders and other organizations); and related recommendations to guide users and  producers of standards and databases to select and describe these resources, or to recommend them in data policies. With a growing adoption list (a ‘live’ updated version can be found here: https://fairsharing.org/communities), the FAIRsharing WG is focusing on refining and expanding connections with other RDA IGs and WGs relevant to its mission and scope, as has already happened with several domain-specific (e.g. ELIXIR, Biodiversity, IGAD) and generic groups (e.g. Standardization of Journal Policies). This joint session with Agrisemantics, the Wheat Interoperability WG and others continues this tradition.

Life sciences are becoming increasingly more data intensive, especially resulting from the huge improvements in large-scale gene sequencing and other “omics” techniques. There is need for large-scale sustainable data storage methods allowing secure and easy access to these highly complex data. Simultaneously, since life science research projects increasingly depend on more than one type of measurement, there is a wide–felt need for integrating data of different types. Very similar issues and similar data sets come up in the different sectors of life sciences, such as health, agriculture, bioindustry and marine life, calling also for interoperability between these sectors. ELIXIR (http://www.elixir-europe.org) has been established to build a sustainable pan-European research infrastructure for biological information providing support to life science research including medicine, agriculture, bioindustry and society.

The ELIXIR Bridging Force IG will not duplicate ongoing efforts, but rather work as an information bridge between RDA and ELIXIR and other relevant organisations. A few examples of tasks of importance for life sciences are:

•          Mechanisms for secure access to sensitive data, including authorisation and authentication issues

GO FAIR stands for Global Open FAIR and aims at bringing interested stakeholders together to define a practical and concrete approach for implementing the FAIR principles. GO FAIR is organized in terms of Implementation Networks (INs) that are groups of stakeholders that decide to collaborate to define, design and/or implement elements that can contribute to a global platform for data, services and computing capacity interoperability. The GO FAIR Interest Group (GFIG) aims at serving as a bridge between the various GO FAIR INs and RDA’s Interest and Work Groups.

User scenario(s) or use case(s) the IG wishes to address:

From one side, RDA Interest and Work Groups produce a number of guidelines and recommended approaches to deal with several data-related issues and they could and should be adopted by the GO FAIR INs (INs) in their activities. From the other side, the GO FAIR INs often identify issues for which there are no recommended approaches yet. These issues will be brought up to the RDA community’s attention by this proposed GO FAIR Interest Group. Some of the identified issues brought from the GO FAIR Ins can be tackled in existing RDA Work Groups and others can motivate the formation of new RDA Work Groups.

Please join my meeting from your computer, tablet or smartphone.
https://global.gotomeeting.com/join/198036325

New to GoToMeeting? Get the app now and be ready when your first meeting starts:
https://global.gotomeeting.com/install/198036325 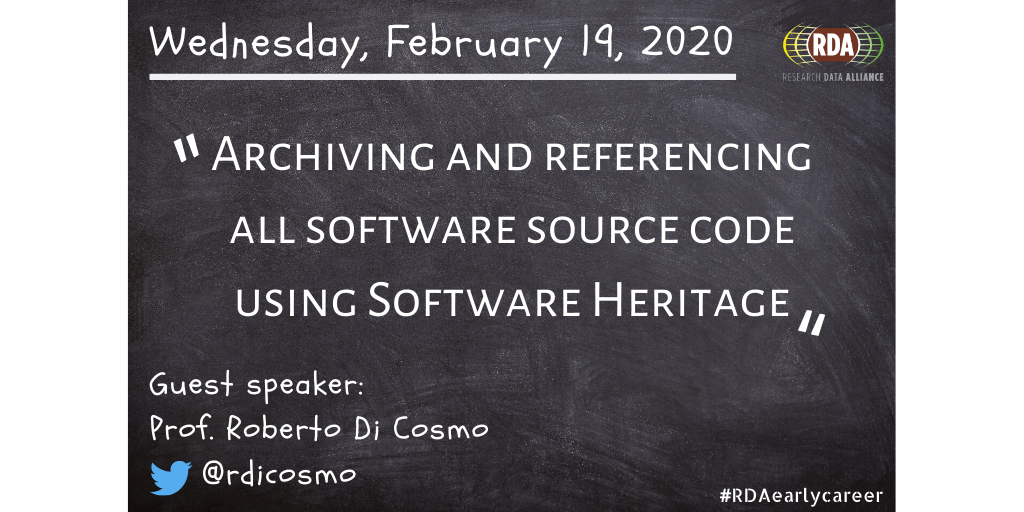