The RDA CoreTrustSeal adoption story across domains and regions 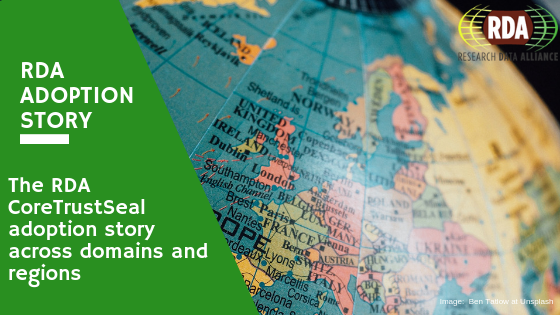 CoreTrustSeal offers to any interested data repository a core level certification based on the DSA–WDS Core Trustworthy Data Repositories Requirements catalogue and procedures. This universal catalogue of requirements reflects the core characteristics of trustworthy data repositories, and is the culmination of a cooperative effort between the Data Seal of Approval (DSA) and the World Data System of the International Science Council (WDS) under the umbrella of the Research Data Alliance (RDA) to harmonize their data repository certifications. The RDA Secretariat has collected a global set of six adoption stories to inspire its further uptake by sharing a wide variety of challenges faced, implementation processes and lessons learned.

From RDA Repository Audit and Certification Catalogues recommendation to CoreTrustSeal

Under a project funded by Australian National Data Services (ANDS) in 2016, the Australian Data Archive (ADA) undertook a self-evaluation audit of ADA systems and policies using the European Framework for Audit and Certification of Digital Repositories (EFAC) basic certification standard (the Data Seal of Approval - DSA). The DSA was in the process of developing the RDA working group with WDS, and by the time of completion of the project, the certification being undertaken had become the CoreTrustSeal. The CoreTrusrSeal was awarded to the ADA in February 2018.

Strasbourg astronomical Data Centre CDS (Centre de Données astronomique de Strasbourg) services are widely used by the worldwide astronomical community. The one million queries per day in 2018, shows that it is considered as fully trustworthy in the disciplinary context. When the World Data System (WDS) defined its criteria for Regular membership, CDS considered it important to join this community, which was initially Earth Sciences and Astronomy. This was done in 2012. A few years later, CDS applied to the Data Seal of Approval (DSA), which it obtained in 2014—the first time the Seal was granted to a repository from the physical science domain. The application preparation led CDS to check its processes and describe them end-to-end, a useful exercise, and their  authorities were appreciative of the certification by external, recognized bodies. It was then only a natural step to apply for CoreTrustSeal when it was time to renew the DSA in 2018.

Evaluation of the repository trustworthiness by an external, recognized body is an important asset. It can be put forward to the repository authorities and users. Depositing data in a certified repository is a positive point in data management plans and certification will encourage data providers to deposit data in the repository. Dr. Françoise Genova,  Senior Researcher, CDS, Observatoire Astronomique de Strasbourg

►Learn more about the RDA in France National Node

The mission of Data Archiving and Networked Services (DANS) in the Netherlands is to promote and provide permanent access to digital research information. DANS is and has always been heavily involved in creating and achieving certification for the trustworthiness of digital repositories. Over the years we went through the process of acquiring certification with two goals: first, to show our stakeholders the trustworthiness of our repository, and second, to improve our internal processes and update our documentation. Preparing for certification is a perfect opportunity to raise the bar and reinforce collaboration between our archive, IT, policy and legal departments.

DANS has used the CoreTrustSeal to sustain and display its reputation as trustworthy data repository in a transparent way, which induces stakeholder confidence and differentiates us from others. At the same time, it helps us raise awareness on digital preservation and the importance of long-term availability of data for reuse. Next to that, the procedure of getting certified improves (internal) communication on our overall mission and goals, but also has a positive effect on our processes and procedures making them even more effective and efficient. Dr. Ingrid Dillo, Deputy Director, DANS, The Netherlands

►Learn more about RDA in The Netherlands National Node

The CoreTrustSeal certification project investigated Commonwealth Scientific and Industrial Research Organisation’s (CSIRO) institutional repository Data Access Portal (DAP) as a trustworthy data repository. There were two parts to the project. Firstly, to use the Core Trustworthy Data Repositories Requirements, an outcome of the RDA/WDS Certification of Digital Repositories Interest Group, to undertake a self-assessment of the DAP. Secondly, to investigate policies, procedures or DAP development to host externally owned data in the DAP. An application was submitted to the CoreTrustSeal and the DAP was certified as a trustworthy data repository in October 2018.

Having the DAP certified with the CoreTrustSeal contributes to CSIRO’s reputation as a trusted organisation and ensures the DAP is following international standards. There has been feedback from CSIRO’s researchers that the CoreTrustSeal certification for the DAP really matters in building trust when they point data users to their published data and software. Also, knowing the DAP has been certified as a trustworthy data repository assists with decision making in repository choice. It provides confidence in the long-term access and reliability of the data. An immediate impact of the project was that documentation was readily available to address a funders requirement of making data open. Mikaela Lawrence, Data Librarian, CSIRO

The Chinese Astronomical Data Center (CAsDC) has been providing data services to users for over 30 years, and has great influence in the Chinese astronomical community. Over the years however, we did not attach much importance to the standardization of data management, resulting in repetitive work and omissions. As a mandatory standard for WDS, CoreTrustSeal provides us with a comprehensive checklist for all aspects of our work in data management. By introducing the CoreTrustSeal system, we realized that we identified areas where we could make improvements, and acted accordingly. In the future, we will continue to make improvements on data management procedures based on CoreTrustSeal,  and we recommend other data centers to adopt this standard.

We found that for each requirement in the CoreTrustSeal system, CAsDC has more or less work done for it. The problem is that a lot of things have been done, but there was no formal summary and documentations. Therefore, there is not a standard procedure formed for repetitive work, and which can be optimized gradually. From now on, we must consider promoting the standardization of procedure while carrying out specific work, and constantly summarizing and improving the procedure. Prof. Chenzhou Cui, National Astronomical Observatories, Chinese Academy of Sciences

The Digital Repository of Ireland (DRI) was launched as a new national infrastructure in June 2015. We developed our research infrastructure hand in hand with the Data Seal of Approval requirements, receiving the Seal soon after our launch. This has facilitated the CoreTrustSeal certification process in 2018 although completing a thorough assessment of one’s work across a range of challenging categories is no small task. It required input from all members of the organisation, efforts to align policies, decisions about what statements/documents should be published, and fixes to technical and organisational processes.

The certification by CoreTustSeal created a common goal to rally around, it improved what we do, and it provided a way for different aspects of the organisation to exchange information and debate best practices. We reviewed and updated our policies and procedures and were one of the first organisations to be awarded the new CoreTrustSeal early in 2018. The fact that the CTS was built in a bottom-up way through the large and diverse network of the Research Data Alliance builds confidence in its fitness to purpose, which is ultimately to ensure the trustworthiness of a repository’s data stewardship over time. Natalie Harrower, Director Digital Repository of Ireland

Social Sciences & Humanities Open Cloud (SSHOC) is a project funded by the EU framework programme Horizon 2020 and unites 20 partner organisations and their 27 associates in developing the social sciences and humanities area of the European Open Science Cloud (EOSC). SSHOC partners include both developing and fully established European Research Infrastructures from the social sciences and humanities, and the association of European research libraries (LIBER). The distributed character of the data infrastructures in use by members of the SSHOC community means that an approach to assessing their trustworthiness and the quality of their data repositories needs to be developed. SSHOC selected the CoreTrustSeal as the Trusted Digital Repository (TDR) certification framework for SSHOC repositories. The certification plan is available on ZENODO with DOI: 10.5281/zenodo.3725868. One of the repositories certified within SSHOC is the UK Data Archive, providing access to the UK's largest digital collection of social sciences and population research data.

Achieving this accreditation demonstrates the ability of the UK Data Archive, to perform all of the relevant activities relating to providing long-term access to data of value to social science researchers, Hervé L'Hours, Archive's Repository and Preservation Manager and CESSDA Trust Working Group leader

Some of the stories in this section are brught forward by the French, Irish and Dutch National Nodes.