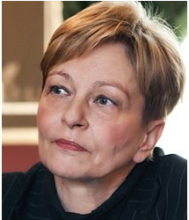 Milena ŽIC FUCHS: born in 1954 in Zagreb, Croatia. From 1958 to 1969 lived in London, New York, and Sydney. In 1977 graduated from the Faculty of Philosophy, University of Zagreb having majored in English language and literature, and Ethnology. In 1982 received M.A. in Linguistics (Semantics) and in 1989 Ph.D. in Linguistics (Cognitive Linguistics).From 1978 teaches various courses in Linguistics in the English Department, and at present holds position of Full Professor.
From 2002 to 2011 Chair of Linguistics in the English Department, University of Zagreb, where she teaches Semantics and Cognitive Linguistics as well as seminars in semantics, discourse analysis and sociolinguistics. Milena Žic Fuchs teaches Semantics, Cognitive Linguistics and American Linguistics at graduate level for PhD students in Linguistics, Applied Linguistics, Translation Studies.In 1995/96 she taught a course (European Structuralism vs. Cognitive Linguistics) at graduate level at New York State University at Buffalo (SUNY) as Fulbright guest professor.
She was the first scholar to introduce Cognitive Linguistics into Croatian linguistic circles. Her book entitled Knowledge of Language and Knowledge of the World (1991) was the first book in Cognitive Linguistics written in Croatian and is one of the most quoted books in Croatian linguistics. In 2007 she authored a dictionary of acronyms together with Stjepan Babić (20000 items), and her latest book Cognitive Linguistics and Language Structures: the English Present Perfect came out in 2009, for which she received the Croatian National Award for Science for 2011.
In 2010 Milena Žic Fuchs was elected as a full member of the Croatian Academy of Sciences and Arts.In 2005 Milena Žic Fuchs became a member of the Standing Committee for the Humanities of the European Science Foundation. In 2006 she was elected member of the Core Group, and subsequently in 2009 she became the Chair of the Standing Committee for the Humanities of the European Science Foundation (2009 – 2012).  From 2008 she has been a member of the ERC Panel “The Human Mind and its Complexity”. She is also a member of numerous Science Advisory Boards, as well as other European level bodies. Milena Žic Fuchs has also acted as an expert for the European Commission - as member of High-Level EC Expert Group for ESFRI (European Strategy Forum on Research Infrastructures). From 2012 she has been a member of the Science Advisory Board of CLARIN – ERIC (Common Language Resources and Technology Infrastructure – European Research Infrastructure Consortium). At present she chairs the Scientific Review Group for the Humanities of the ESF. In 2013 Milena Žic Fuchs was elected member of Academia Europaea.