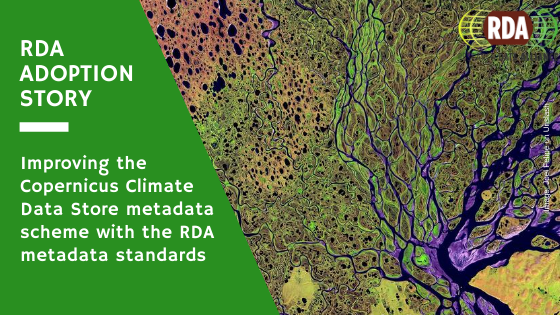 Following a successful application to the RDA Europe 4.0 open call for Adoption Grants, the Barcelona Supercomputing Centre (BSC) began its project to quality check and document the data stored in the Climate Data Store (CDS). The Climate Data Store repository contains various types of data for which summaries are presented at the level of variable and dataset. Adopting and presenting the RDA metadata repository as a trustful reference, and using the various standards gathered there, has helped to improve recommendations on what should be presented in the CDS.

The end beneficiaries of this work will be the users of the Climate Data Store as they will be able to get robust information on which metadata standards are included in the data they are using, making their usage easier and increasing their trust in the data provided. The second beneficiaries will be the CDS managers who, thanks to the work done in this proposal, will get a more trusted and documented data repository. The impact of the work developed in the grant is significant since the data service has around 35,000 registered users from over 60 countries with presence in all continents. The data volumes are also significant since the service provides around 50TB of daily data to the users.  Joan Sala Calero (Barcelona Supercomputing Center)

The conventions for CF (Climate and Forecast) metadata are designed to promote the processing and sharing of files created with the NetCDF API. These conventions are gaining acceptance and have been adopted by a number of projects and groups as a primary standard.

The conventions define metadata that provide a definitive description of the data represented in each variable, and the spatial and temporal properties of the data. This enables users of data from different sources to decide which quantities are comparable, and facilitates the building of applications with powerful extraction, regridding, and display capabilities.This is the link to the RDA metadata repository for CF metadata can be found here on GitHub.

The Common Information Model, a metadata standard used by the climate research community and presented in the RDA metadata standard repository has also been used as a recommendation in the CDS, especially regarding the Coupled Model Intercomparison Project (CMIP) climate models. 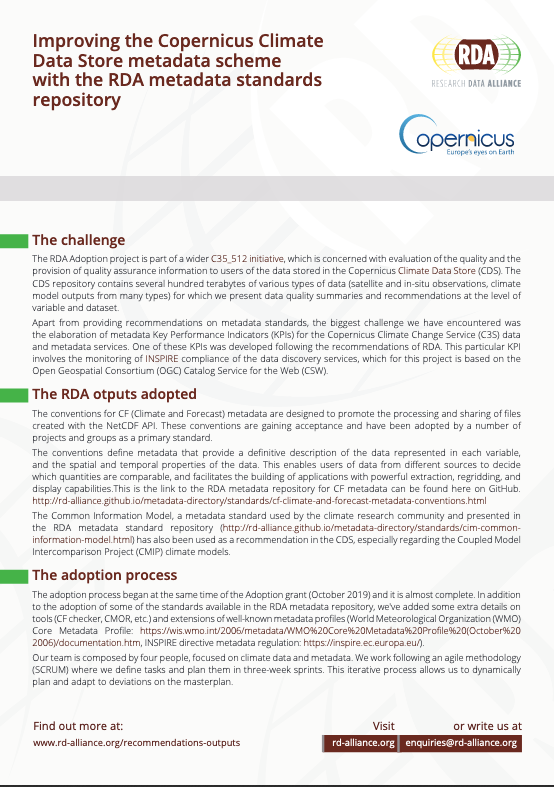