The second RDA Europe 4.0 Node coordination workshop took place at the Helsinki plenary this past October. Running as a co-located event a few days in advance of the main plenary, this face-to-face meeting offered a forum for representatives from each of the national nodes to come together to discuss their activities and identify commonalities. As part of the RDA Europe 4.0 project, regular node coordination calls take place addressing many of the same issues; however, these face-to-face events allow topics to be tackled with a more engaged, round-table approach, and also allow representatives from newer nodes to network with the rest of the group in person.

In total, there were 34 attendees present on the day - this included node coordinators, other node representatives, and RDA Europe project facilitators. Though there were some absentees who could not make the meeting, in total 19 of the 22 RDA European nodes were present. In addition, RDA Europe Ambassadors from the domains of Agricultural Sciences, High energy physics/Fusion, Sustainable Development Goals, Media and Communications, Humanities, and Engineering/Renewable Materials were in attendance.

After informal introductions over lunch, things were kicked off by Sarah Jones (Digital Curation Centre) and Daniel Bangert (University of Göttingen). The workshop aims, a recap of RDA node objectives, and an update on recent project activities were raised to frame the rest of the day’s discussions. The announcement of three new national nodes - Bulgaria, Romania, and Estonia - had taken place shortly in advance of the meeting and the group was updated on their status and the steps ahead to integrate them into the node network. 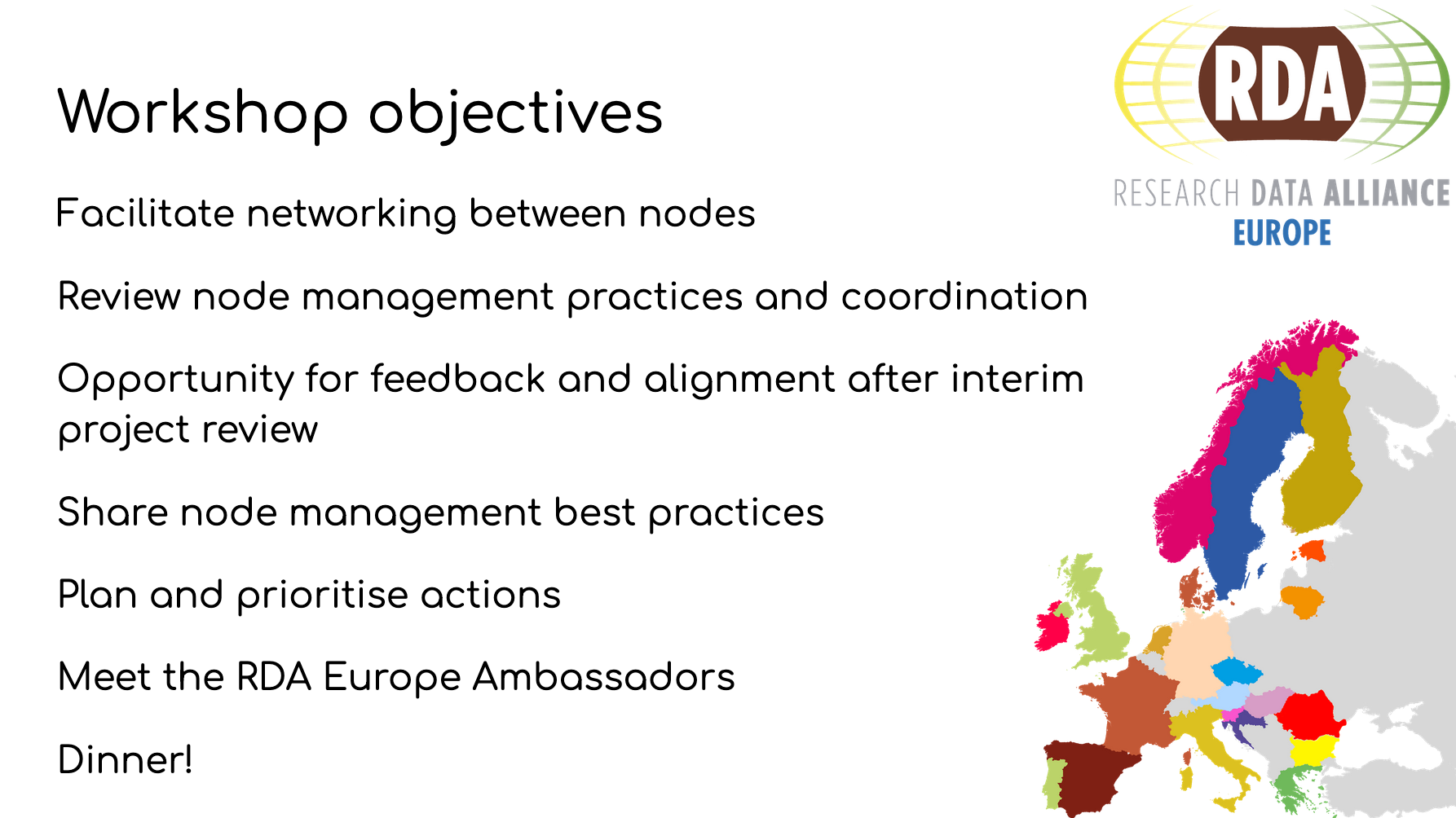 The round-table aspect of the meeting was used to encourage input from all attendees - to start the discussions, a live poll was used to obtain a snapshot of the topics that had been the focus of the nodes’ attention in the time since the last workshop held at EOSC-Hub Week in Prague (April 2019). In addition, the more established nodes were asked to give some examples of strategies that had worked well for them in earlier phases of their work.

The next phase of the session focused on three facilitated discussions around the topics of the nodes’ contributions to the European Open Science Cloud, opportunities for cross-node collaboration, and the main considerations from the RDA Europe 4.0’s recent interim project review. Sarah led the first discussion, outlining the specific avenues through which the nodes could become more involved in EOSC. Feedback on the day was constructive: one of the key points raised was regarding the focus of EOSC and the variety of services it offers; its mission to “interlink People, Data, Services and Training, Publications, Projects and Organisations” was welcome, but there remained the issue of EOSC being almost too broad to define and therefore difficult to engage with. The volume of personnel involved in both node activity and EOSC was seen as a positive and was mentioned as a possible route to ensuring the sustainability of the node network beyond the end of the RDA Europe project. However, it was generally acknowledged that while EOSC activities were progressing rapidly in some countries, in others, the social networks and infrastructure meant that nodes were hindered in their ability to contribute.

Ryan O’Connor (Digital Curation Centre) then picked up the discussion to bring attention to cross-node activities. Largely prompted by the interim review, the need to balance local and national activities with a concerted effort to contribute to both EOSC and the RDA globally was addressed. The discussion centred on how to re-orientate planned activities to incorporate international input. A level of regional coordination was already underway, with RDA Nordic seeking to align the activities of the national nodes in this region - similar initiatives were encouraged and will be part of the focus of the nodes for the remainder of the project. Next, RDA Europe node coordinator Daniel Bangert took up the subject of the main points raised by the project review in relation to the nodes. This was largely concerned with streamlining reporting, including documenting and demonstrating engagement with stakeholders, and ensuring that these engagements have a European orientation and do not only cover national needs.

Over the next coffee break, node representatives were encouraged to look to the future - in an adjoining room, each node’s national flag was displayed along with details of future events planned, any RDA Outputs being adopted, and the main areas of interest for their national communities. Circulating throughout the room, the representatives were tasked with finding common areas of activity in order to develop their connections with others. By way of incentivisation, there was a prize on offer for the node which found the most commonalities - congratulations to the winners on the day, Sweden and their node coordinator Maggie Hellström! Based on the information provided, the RDA Europe project partners developed a matrix to highlight common node priority areas and help facilitate cross-node collaboration along thematic lines. 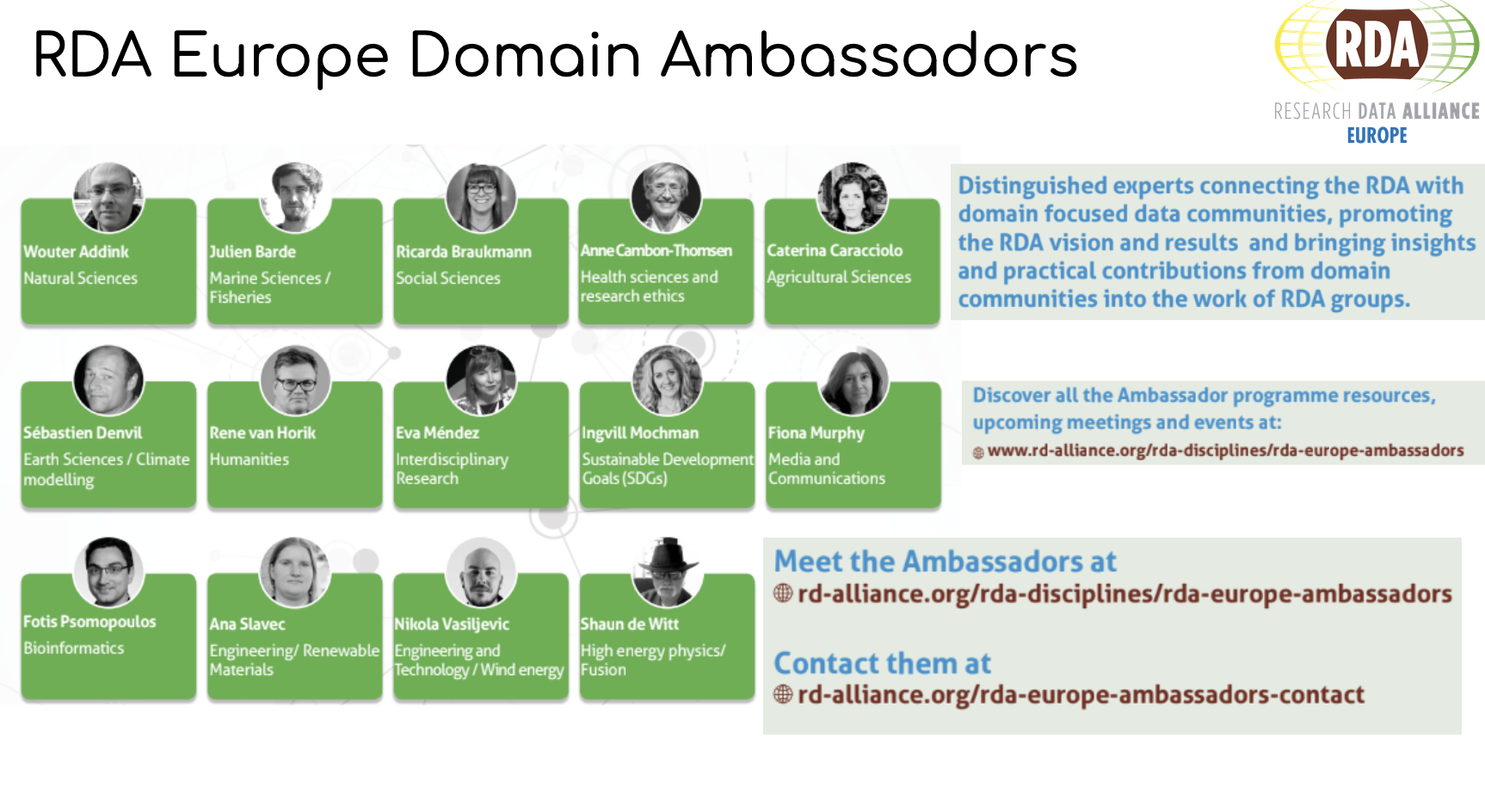 Next up was a consideration of the future of the RDA in Europe beyond the end of the current RDA Europe 4.0 project. Feedback was sought on the first draft of a White Paper outlining the directions for the relationship between the RDA and EOSC; some useful points were raised on the potential risks and opportunities, with those in the room encouraged to provide further comment after the plenary. RDA Europe project coordinator, Sara Garavelli (Trust-IT Services), then turned the attention briefly towards the EOSC Symposium event in Budapest (November 2019), before the workshop ended with a detailed introduction to the RDA Europe Domain Ambassadors. As well as focusing on their particular areas of expertise, potential areas for collaboration between the national communities and the Ambassadors present were debated. This wrapped up the session appropriately on the theme of collaboration.