Sadivayal became Amrita SeRVe’s first organic-agriculture certified village in Tamil Nadu. Amrita SeRVe [https://amritaserve.org] first visited the tribal community in 2016. The same year, they started organic cultivation with 20 of the most deprived farming families by forming the first Amrita Farmers’ Group. They registered under the Cooperative Society Act under the name Amrita Vyavasayam Kulu and maintain a joint bank account.

Intent on growing purely organic rice, the members themselves defined their responsibilities and formulated rules for their collaboration. With guidance from Amrita SeRVe agriculture experts, they selected the best seed variety and carried out soil and seed testing, crop planning, water budgeting and planned water conservation measures. Every step was discussed among the group to find solutions.

“We took a chance and tried something different. The result was selling a new crop for double the price of anything we had grown before. Not only that; the seeds we sowed gave us a double yield.” — Rajan, member of Amrita Vyavasayam Kulu

On the 20th of June, the farmers planted nearly 600 kilograms of organic Bhavani rice on their joint 30 acres of land. Cultivating without chemical inputs meant learning and practising with organic fertilisers and pesticides such as Jeevamritam, a natural fertiliser. This organic venture paid off in January 2017 when they harvested their first profitable crop in five years.

After this great success, they decided to expand to 35 acres and surrounding villages expressed interest in learning from the farmers as well. This way other farmers could convert their agriculture to natural methods, as well. Sreeni KR reports: “By 2019, around five nearby villages have been converted to rice fields for the adoption of a similar approach with the traditional Bhavani variety.”

Since 2018, Amrita SeRVe has been working with the Tamil Nadu Organic Certification Department [https://www.tnocd.net/], the government office, which applies the standards set by the National Programme for Organic Production (NPOP). For this purpose, the farmers needed to apply for land deeds and the soil was examined by officers several times over the last two years.

The certificate covers the production of mixed vegetables, mango and rice. The land is subjected to annual inspections for maintaining the status. This empowers farmers to receive more value for their produce and thereby increases their annual income. 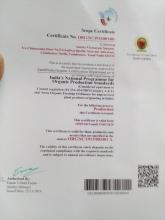