A regular conference attender's experience of an unconference

I've attended a few conferences in my time, but have only had limited exposure to the unconference way of doing things. So when I heard that the IDCC Conference in Melbourne this month was having an entire unconference day, I signed up immediately.

The first difference from the normal conference format was that activity started well before the day. The organisers promoted the use of a  shared document (etherpad, although the technology is not that critical) to generate/capture/ and vote on possible topics that might be discussed on the day. During the IDCC "main" conference, people responding by going to the shared document and proposing ideas or commenting on what was there already. So the unconference and conference were nicely connected, with the unconference as a form of response.

On the day itself, we all gathered in a flexible space at the conference venue. 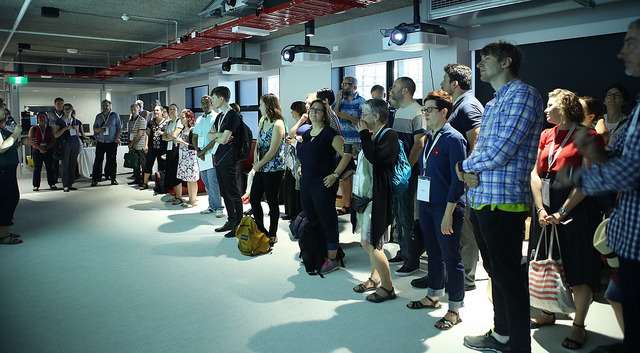 The facilitator took us through the most popular topics from the etherpad and we jointly agreed on what would be the first set of discussions. People were able to pitch for the groups they were facilitating. 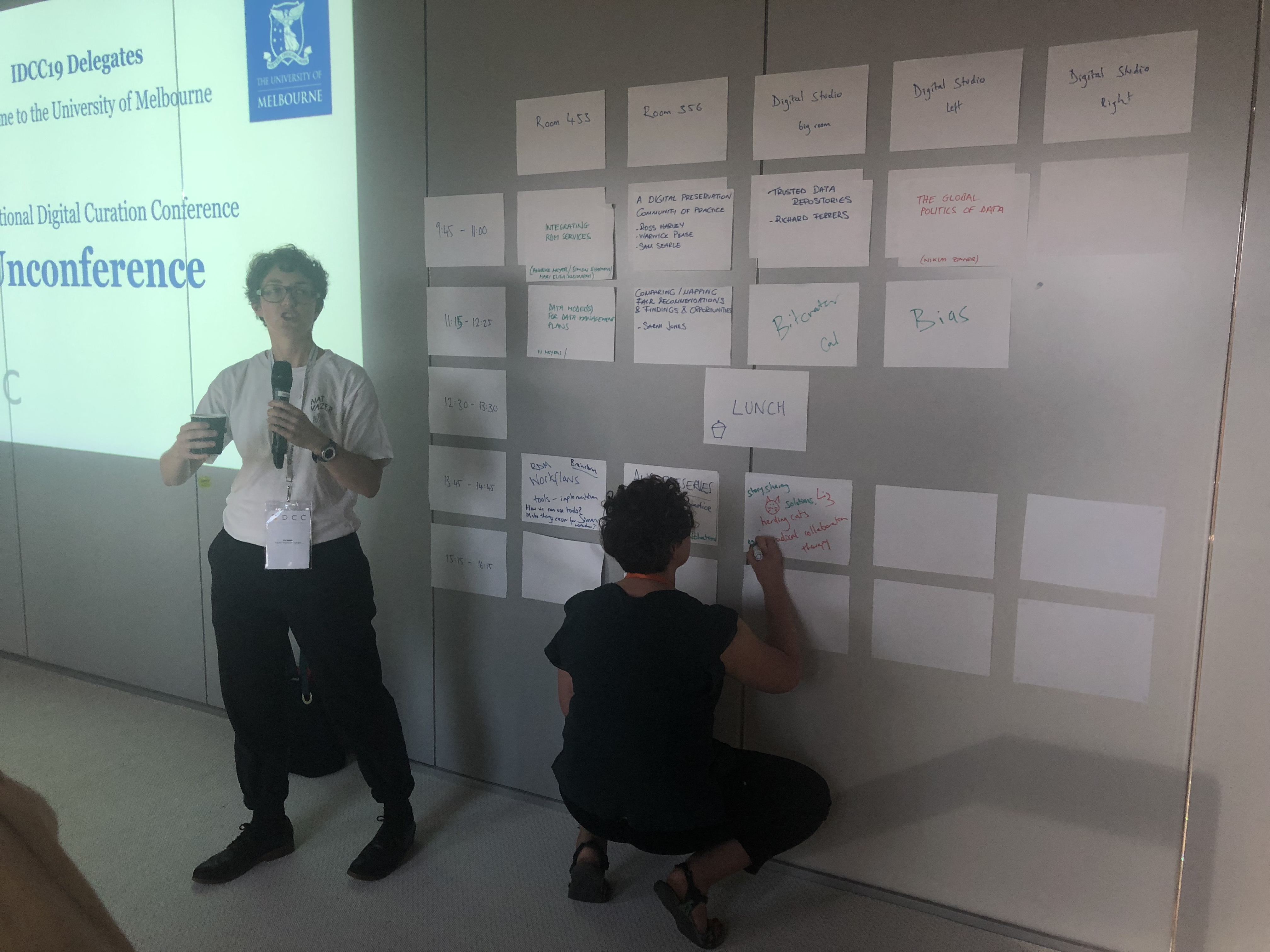 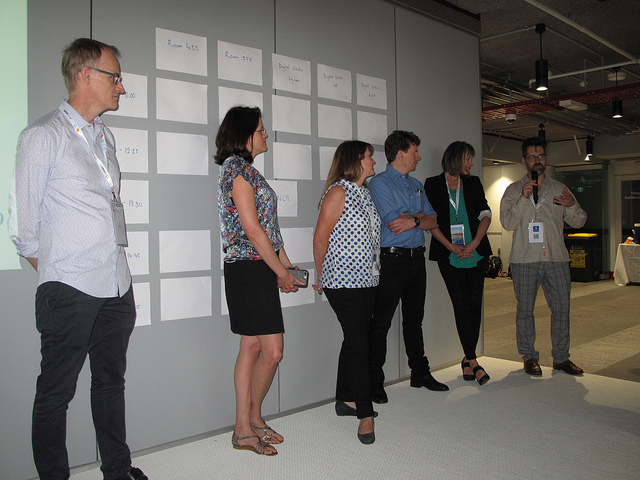 This was a fluid informal process where as a group we were trying to balance discussion sizes, who had conflicting desires to attend simultaneous sessions, and desirable group sequences across the day. Each discussion session had an identified facilitator and a Google doc (linked from the Etherpad) set up for collaborative editing by the attendees while the session was running. After some housekeeping, we headed off to our chosen sessions for a 75 minute (or so) discussion. In each of the session slots there were 4-5 options available.

I attended three groups, with three different facilitators, and each had quite a different feel. This was in part a function of who was attending, and in part influenced by the facilitation.

The first group I attended started with going around the table with brief introductions. The facilitator then tried to identify possible topics or themes for discussion, and keep the discussion going. Only a few of those in this group used the collaborative document for note-taking. There was lots of discussion and information sharing, but no specific actions at the end.

We then reconvened and discussed (as a whole) which topics to cover next. Some of the groups now proposed follow-on topics based on the discussions that had been having. This illustrates one of the advantages of the unconference format - it can respond very quickly to what people want to do. People also had the opportunity to look at topics that had been proposed to help them decide. 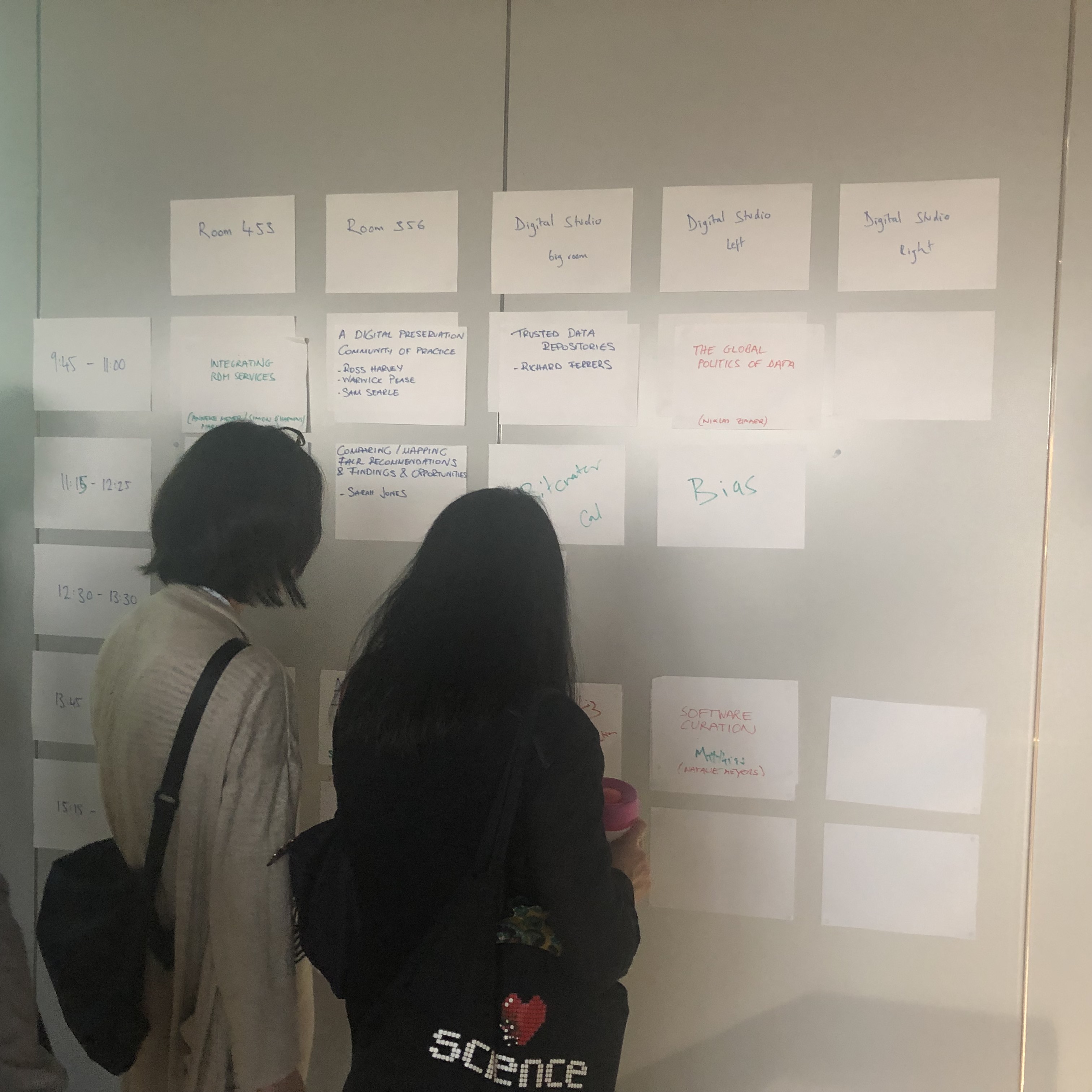 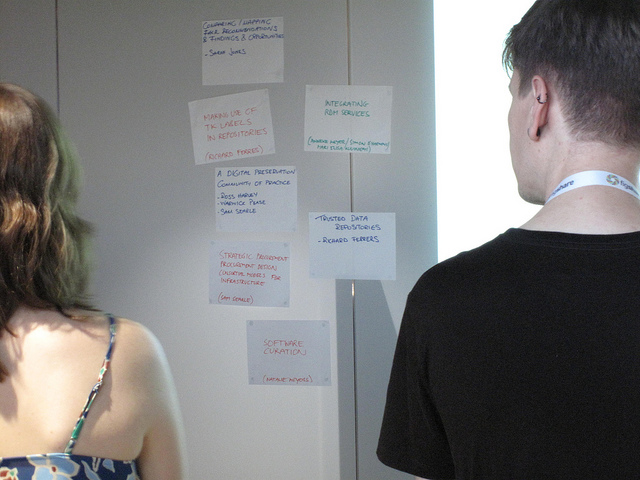 The second group was much larger and so there were many more perspectives on the topic. As a result it was harder to get agreement on what focus to have or what to do next. This meant the focus was much more on information sharing and no clear actions at the end.

After reconvening again and networking/continuing the discussions over lunch, we headed off to our last groups.

At the end of the day we reconvened and debriefed.

I found the fluid and responsive nature of the process both scary and liberating. Scary because I didn't know how the day was going to go. Liberating because the group as a whole (rather than a conference committee) was determining the agenda.

If you have never been to an unconference before I would strongly encourage you to do so. We are experimenting with a short "taster session" on the last day of Plenary 13, immediately after the conference concludes. Sign up and give it a try!

Reflecting on the Ethics of Data Infrastructures

Data is Light – observations from the 6th RDA Plenary

There are 1 comments on "A regular conference attender's experience of an unconference".