Physical samples are a basic element for reference, study, and experimentation in research. There is an urgent need for better integrating these physical objects into the digital research data ecosystem. This group aims to facilitate cross-domain exchange and convergence on key issues related to the digital representation of physical samples and collections. You can view the description of our Interest Group on the RDA website for more details. This blogpost provides an overview of our activities in the past year.

Our year kicked off with our session on ‘Cross-disciplinary sharing of samples and increasing awareness’ (20 April) at the 17th RDA Plenary. This session touched upon the topics of interdisciplinary persistent identifiers for physical samples, which was presented by Joel Benn. This was followed by a presentation on Research Resource Identifiers (RRIDs) by Anita Bandrowski). During the session the draft of the 23 Things Physical Samples was introduced (see below). We also surveyed whether people would be interested in presenting in the webinar series that we planned to host, with several people that joined the RDA plenary interested in contributing. You can watch the recording of the session.

The 23 Things Physical Samples is a flyer/2-page document, which introduces the reader to the current resources for Physical Samples. The output is inspired by an earlier output from the RDA community: 23 Things: Libraries for Research Data. It provides some starting resources on Physical Samples, resources related to persistent identifiers and metadata, sample citation and ownership, tools and infrastructure and communities in which physical samples play a key role. Group members provided input on the document during the 17th RDA plenary and during two discussion sessions that were hosted before the summer. People could also contribute to the flyer in their own time or through email. In total, eight group members contributed to the resource. We are still looking for your feedback and contributions to the draft, which is up for community review until 2 December.

To increase more awareness about the importance of physical samples in research, the group co-organised a webinar series, supported by the RDA and ESIP (Earth Science Information Partners) Physical Sample Curation Cluster, with support from Stephanie Hagstrom, Meghan Underwood and Megan Carter. Both of these groups have similar interests and we therefore took the opportunity to work together on this series. A detailed description and recording of each webinar can be found on their webinar page hosted by the RDA. Below follows only a very brief overview of each webinar.

Our first webinar focused on how electronic lab notebooks can facilitate the management of physical samples and was titled ‘Supporting Reproducibility by Capturing Physical Sample Data and Metadata in a Connected Electronic Lab Notebook’. During the webinar, Harald Kusch and Robert Kossen provided a researcher/institutional perspective on the implementation of an electronic lab notebook. Rory Macneil and Vaida Plankyte then introduced RSpace and demonstrated its functionalities. The discussion was moderated by Esther Plomp. 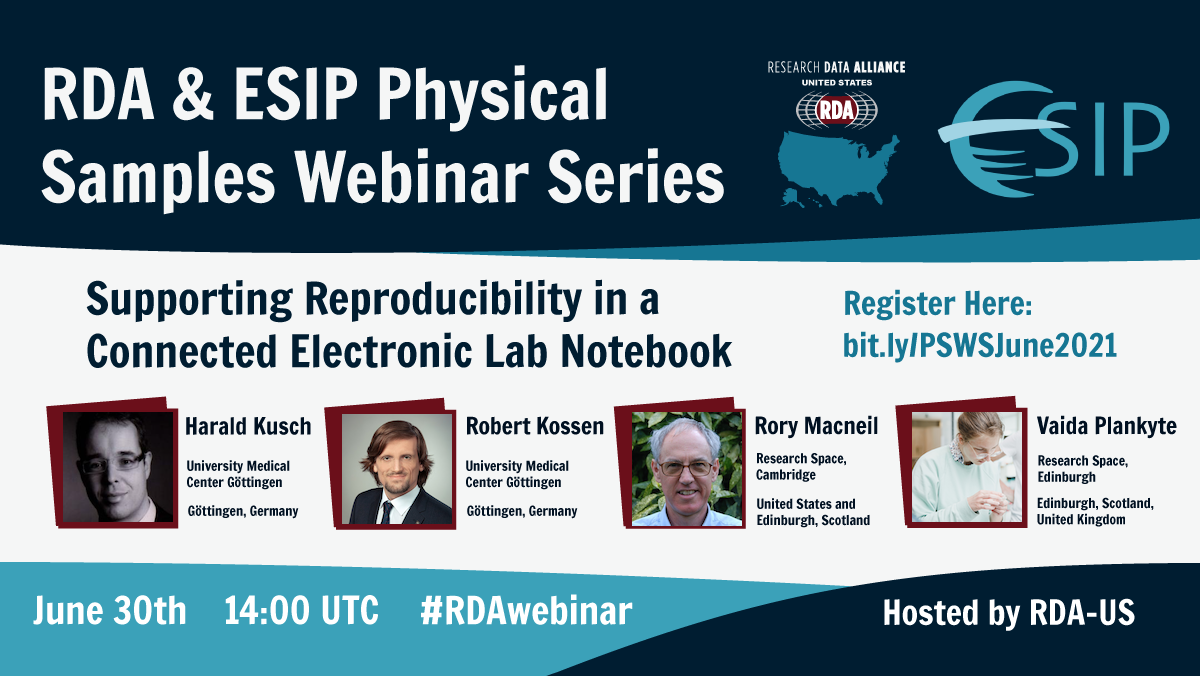 Our second webinar focused on the implementation of a persistent identifier for reagents in the biomedical sciences and was titled ‘RRIDs: A Way to Track Samples Through the Scientific Literature’. Anita Bandrowski provided an overview of the history of RRIDs and the challenges and lessons learned along the way of implementing persistent identifiers in the scientific literature. 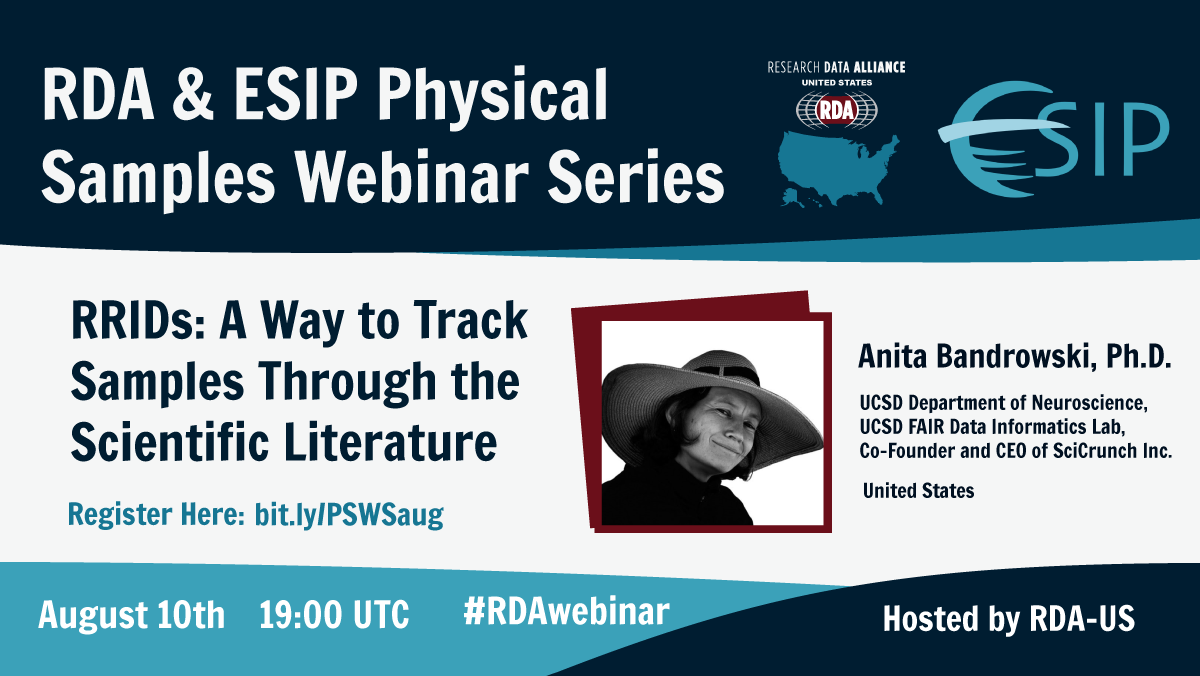 Our third webinar focused on sample metadata in a range of disciplines (geoscience, genomics, and biodiversity) and was titled ‘Supporting Interdisciplinary Sample Data Discovery, Integration, and Reuse’. The webinar was led by Joan Damerow who introduced the topic and featured Kerstin Lehnert, Ilene Karsch Mizrachi, and John Deck introducing their projects. This webinar series introduced a similar topic of discussion for our 18th RDA plenary session. 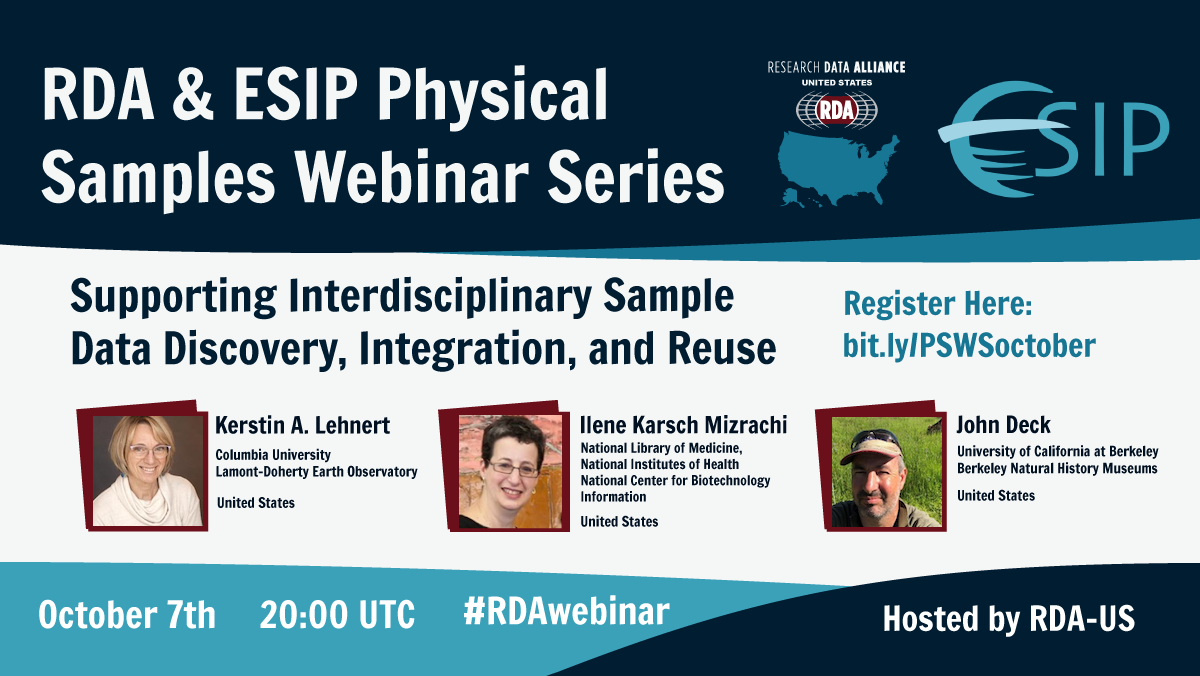 Members of the Interest Group were also involved in a SciDataCon session on Celebrating a decade of making material samples FAIR and Open: where to next? (21 October.) This year was the 10th anniversary of the formation of the IGSN e.V.. The session was introduced by Kerstin Lehnert with a review of how IGSN was formally set up as a samples identifier system in 2010 and how it has grown to nearly 10 million identifiers. Joan Damerow and Shawn Ross highlightedcurrent services, tools, projects, and community efforts which involve making physical specimens FAIR and Open. This was followed by two talks by Matt Buys and Natasha Simmons on future trends and how identifiers for samples fit into the overall usage of PIDs in the Research Ecosystem. Session notes and a recording are available.

Our year closed with the 18th RDA plenary session on ‘Sample Identifier and Metadata Practices/Tools to Enable Interdisciplinary Sample Data Discovery, Integration, and Reuse Across Multiple Data Systems’ (9 November). This session continued where the last webinar took off, bringing together the community on the topic of key metadata elements across multiple sample communities. These key metadata elements can enable sample and data discovery, access and linking across systems, and ensure credit in the reuse of samples and data. The session included lightning talks on developing infrastructures for samples by Sarah Ramdeen (ESIP Samples Cluster), Kerstin Lehnert (iSamples/Sampling Nature), Steve Richards (iSamples metadata mapping), and Jens Klump (partnership between IGSN and DataCite). This was followed by an introduction to use cases on interdisciplinary linking of physical samples and data by Joan Damerow. The group was then split into three breakout rooms on 1) interdisciplinary sample/data discovery, led by Steve Richards, 2) sample metadata by Joan Damerow and 3) reuse of samples and data by Lesley Wyborn. A recording of this session will be available in mid-December.

If you would like to keep up to date with the latest news on physical samples, you can sign up for the Physical Sample Interest Group by joining the Research Data Alliance. We hope to see you during one of our future activities!

The International Data Week 2018 and my first RDA Plenary

By Maria Christoforaki on 02 October 2013

By Aravind Venkatesan on 01 October 2014

There are 0 comments on "RDA Physical Samples and Collections in the Research Data Ecosystem Interest Group 2020-2021".