Data sharing: is it all about trust?

On 30 January 2018, I attended the Research Data Alliance EU Data Innovation Forum in Brussels. The meeting was focused on innovation, but the common issue discussed in every session was trust: the lack of which sometimes prevented the implementation of innovative solutions, and which sometimes, was the main driver for innovation. Below you will find some of my key reflections on the topics discussed.

Lack of trust as a barrier to innovation

First, Marta Pont Guixa introduced the results of her research into the practices of business to business data sharing. Not surprisingly, her findings revealed that many businesses relied on access to data and on the exchange of data with other businesses for development of new products, services and for efficiency gains. However, what was quite interesting to hear, is that sharing was typically happening between businesses operating within the same sector and usually a very small proportion of data was shared. Some companies complained about frequent denials of access requests.

Apart from technical challenges, the main obstacles preventing a more widespread data sharing were the issues of awareness and trust. The absence of a legal framework and uncertainties about the practical meaning of the new EU GDPR regulation meant that businesses were often unsure if they were allowed to share data and under what conditions. In addition, the risk of competition led to lack of trust over how the data will be re-used and for what purposes. During the coffee break, one of the attendees mentioned that effective sharing between businesses is often enabled by knowing the right people and gave an example of sharing facilitated by someone knowing the company’s CEO since the primary school times. Could the presence of effective legal frameworks increase the efficiency of sharing?

The discussion about sharing in a business context was extended to a wider discussion about trust: who do we trust? One hypothesised that perhaps academic institutions are more trustworthy. However, while indeed it seemed that commercial competitiveness is not as fierce in academia than in business environments, the pressure to publish and to be the first to report on academic findings, resulted in research reproducibility crisis, which in turn lead to distrust in academic research.

In addition, one mentioned that the lack of legal frameworks and adequate legal support for data sharing led to problems at academic institutions. One of the attendees reflected that overworked research support officers often preferred to be risk-averse rather than to help researchers decide on appropriate risk management strategies. This, in turn, resulted in datasets not being shared, or in researchers entering into agreements with third parties on their own, bypassing the institutional regulations. As a consequence of the latter, discussions about sharing become extremely convoluted, and with no legal agreements in place, and release of datasets becomes cumbersome. This, of course, raises further questions not only about the transparency and reproducibility of research but also prevents the wider society from benefiting from research discoveries.

In the second session of the conference, Andreas Rauber reflected on the popular analogy that data is the new oil and, consequently, the notion that Data Scientist is the “sexiest job of the 21st century”. However, Andreas also mentioned that with the vast amounts of data available, data analysis becomes more and more challenging. Decision makers are served the end results and pretty pictures, which often influence not only business decisions, but also policy changes. Do these decision makers see the algorithms used, do they bother to understand the input data and the inherent biases before they decide to include the results in reports and recommendations?

Lack of trust as a driver for innovation?

The final session was about possible blockchain applications for data. Monique Morrow from Humanized Internet discussed cases where the use of blockchain technologies could provide solutions in extreme environments where lack of trust is an everyday reality. She introduced the drama of people in humanitarian crisis situations, where the basic human right – the right of own identity, is denied. How can warzone refugees with no documentation prove their identity? How can they prove their education, degree certificates, and job qualifications? There are numerous hopeful examples of what could be achieved with the use of blockchain in situations of distrust.

It was also interesting to talk about the potential use of blockchain in scholarly communication and in the management of (research) data. Edwin Morley-Fletcher introduced the concept developed by the consortium My Health My Data, which aims to create a novel blockchain-based platform for handling medical data transactions. There were recently numerous discussions about the potential of blockchain technologies for scholarly communication,  including the extensive report “Blockchain for Research”, but it is yet unknown whether blockchain will be the game changer. As Peter Wittenburgsummarised, the blockchain, as any novel technology, is not yet perfect, and there will certainly be issues which will have to be addressed.

And my final reflection: is the distrust in academia enough of a problem to create the need for blockchain-based solutions? Or, perhaps, the technology will develop so attractive offerings that trust issues won’t be the main drivers for adoption anymore. I hope for the latter!

Tracking the impact of the CODATA/RDA data science schools: the case of the OSG

RDA 8th Plenary - Towards a collaborative and open Science

There are 5 comments on "Data sharing: is it all about trust?". 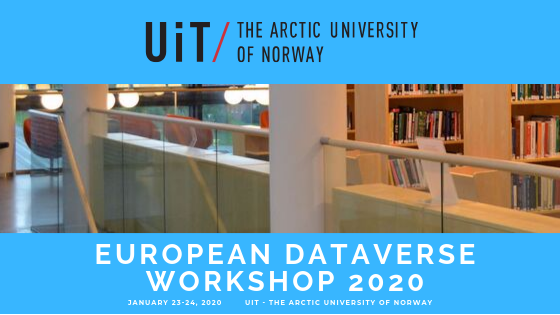 Dataverse is an open source web application to share, preserve, cite, explore, and analyze research data. Save the date for the European Dataverse Workshop 2020, to be held at UiT The Arctic University of Norway