In my previous blog post I reported about my experiences at the pre-plenary event of the 6th RDA Plenary in Paris. In this post I will report on the first plenary session of Day 1 (September 23rd). More than 600 Open Data enthusiast registered to the meeting, which was really exciting. 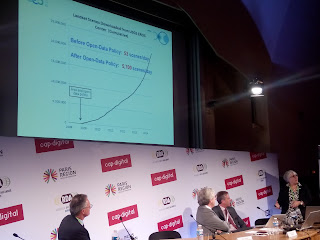 The plenary session included presentations by reknown Open Data actors and supporters. The first speaker, Robert-Jan Smits of the European Commission's DG Research and Innovation, presented about the EC's current efforts to support Open Science and stressed the growing importance of data and data sharing. In H2020 8 billion € are dedicated to promote Open Science projects, and data management plans are part of the Grant Agreements of H2020 projects. A substantial challenge is the storage and curation of data after the end of research projects. The EC has lauched  an expert group to explore how to further develop an European Science Cloud and related services, which should facilitate storage, curation, and access of research data. Robert-Jan Smits calls out for input by the science community, which is needed in this context. In particular input related to interoperability, long-term preservation, as well as data storage and sharing infrastructures is desirable. His wish for the RDA community is to translate current efforts into concrete deliverables to support the science funders to address these challenges. He very much welcomed that the plenary organisers chose the current climate change as lead topic of the event.

After a video message by Commissioner Oettinger (Digital Economy & Society), who stressed the importance of 1) data for developing products and services for building a data economy, as well as of  2) data sharing for the digital transformation of industry and society, Mark Parsons (RDA) gave a quick introduction to the Research Data Alliance and its mission. The RDA is a bottom-up approach addressing cross-cutting themes like persistent identifiers and their granulation, trust and how to certify trust, as well as mediation and building bridges between data actors and sectors. Mark stressed that trust in general is central in terms of data sharing: trust is about shared experience and shared perspectives. The latter can have a broad range, and both engage and cause frictions. It is important to consolidate use cases and to consider their diversity. A specific goal of the RDA is to reach out to people external to the alliance and to solve actual problems. RDA is mainly about people, who bring in their enthusiasm and activities. Examples of RDA activities are webinars, community working groups and interest groups. RDA's partnerships (with e.g. CoData, World Data Center, Orchid) as well as the individual commitment and enthusiasm by the RDA members are both driving force of the alliance.

Mark stressed that in the context of the current climate change the industry has to be part of the solution: it is not about mitigation but about reaction. Involving the private sector in Open Data debates and solutions is crucial. Building social and technological bridges to openly share data is necessary. Data sharing in general, but especially in a fully open and interoperable context, is a great challenge.

Two more speakers joined the first plenary session. The French Minister of State for Data Economy Axelle Lemaire introduced a new metaphor for data, which is often referred to as the oil of the 21st century. According to Axelle Lemaire a better comparison for data is light: light - as well as data - needs to be shared and circulated to gain value. France is rather advanced and innovative in terms of Open Data: According to the Global Open Data Index by Open Knowledge France is ranked 3rd. France is also involved in a taskforce with GB to strive for bilateral and multilateral collaborations in the Open Data sector, especially with the industry and the economic sector. Axelle stressed the importance to achieve international (open or mutual) standards. 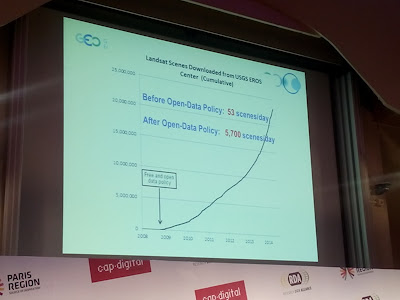 The final keynote speaker, Barbara J. Ryan (Group on Earth Observations - GEO), talked about the importance of Open Data in the field of earth observation (link to presentation). Earth observations are crucial to better understand the current climate change as well as other phenomenons, which Barbara showed us by using examples like the impact of the arctic region or the atmospheric concentration of CO2 on the globe. After introducing GEO, a voluntary partnership of governments and organisation, she stated that currently information for the benefit of society is mostly kept in silos. Integration of data is not only a technical matter but a thematic one as well. Barbara stressed that data ought to be an indirect benefit of taxpayer-funded actions and institutions. There is a real need for adding value to the individual datasets to be able to exploit the information contained within the data in various contexts. The thereby achieved insights could substantially support e.g. decision making. Barbara showed also a perfect example for the utility of Open Data policies: after the USGS EROS Center Open Data policy was issued the download rate of Landsat Scenes instantly started to grow exponentially (see image above).

In the end of her talk she quoted an advertisement, which she adapted to the following: Countries have borders; Earth Observations don't. Ths is also true for research applications! In my opinion, this great statement makes clear that is important to overcome unnecessary barriers in order to unleash research's full potential.

For me it was a very exciting plenary session, which was followed by a series of interesting breakout sessions. As many very intense meetings took place afterwards it will not be possible to report about all of them. In any case I had a really great and inspiring time during the three days of the plenary that I had the pleasure to attend. I can only recommend you to engage with the RDA!

Easing the trauma of telecons

ENERGIC- OD puts FAIR principles into practice across the EU

#IDW2018 at Botswana: These are exciting times to get into research data management