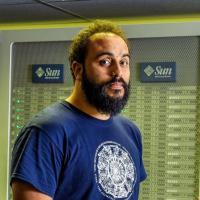 Raphael Mendes de Oliveira Cobe studied Computer Engineering and holds a Ph.D. on Computer Science with emphasis on Artificial Intelligence. He accounts for over 15 years of experience on software development. He works as Research Associate at Sao Paulo State University since 2015 on projects related to Machine Learning and High Performance Computing. He is also part of the team that maintains the SPRACE WLCG Tier 2 infrastructure. Since 2018, he's been acting as co-chair of the CODATA/RDA Research Data Science Schools for Low and Middle Income Countries and helped organizing and taught at several editions of the schools. He is one of the founding members and currently project manager of the Advanced Institute for Artificial Intelligence - AI2, a non-profit organization that aims to connect the university and the private sector by means of projects that have a positive socio-economic impact.

What is your history with the RDA and what impact has it had on you?

The first time I heard of the RDA was in 2016, during the first CODATA-RDA School of Research Data Science. I attended this school as a participant and it was great opportunity to get in touch with a community of early career scientists that were just into data as me. After that, I helped organising the school back in Brazil, where such a curriculum is much needed and that was only possible because of the RDA sponsorship. As a result of that I was first invited to join the CODATA/RDA Research Data Science Schools for Low and Middle Income Countries interest group as a co-chair. I was amazed by the work that was being done by the people in the group. Thanks to that group I was able to attend my first RDA plenary. I’ve never heard of that event and was positively surprised by the coverage in terms of knowledge areas of the working groups. Thanks to the RDA support our IG was able to bring the schools to several Low and Middle Income Countries other that Brazil (e.g, in Africa, South and Central America, Asia). Now, whenever I’m looking for some guidance on a specific opendata/openscience topic I look over the WGs and IGs directory and look for a group that I could learn from/collaborate with.

What do you feel you bring to the TAB and what is your experience so far in being a member?

I’ve been a member of the CMS LHC collaboration for a couple of years, so I’m used to work with large multicultural, interdisciplinary, distributed groups. I hope I can use that experience to contribute to the integration of the WGs, improving the chances of the adoption of their outputs. Also, as a member of a former WG I have some ideas of how RDA could help the WGs development.

I’ve been a member of the TAB for a couple of months now, and so far it has been a great experience. The members as well as the RDA secretariat have been very helpful and always available to help with the TAB responsibilities. Also, inside the TAB I’ve had the chance to interact with/learn from groups that I wouldn’t otherwise.