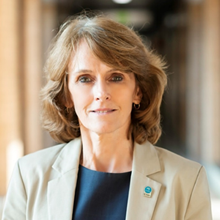 Dr Cathy Foley is Chief Scientist of CSIRO, Australia’s national science agency and innovation catalyst. CSIRO solves the greatest challenges through innovative science and technology. It is one of the world’s largest mission-driven multidisciplinary science and research organisations, collaborating with industry, government, academia and the community to unlock a better future for everyone.

Dr Foley has made significant contributions to the understanding of superconducting materials and to the development of devices using superconductors to detect magnetic fields and locate valuable deposits of minerals.

She was awarded Agenda Setter of the Year in the Women’s Agenda Leadership Awards in 2019, the Australian Institute of Physics Medal for Outstanding Service to Physics in 2016, and the Clunies Ross Medal of the Australian Academy of Technological Science and Engineering in 2015. In 2014, she was awarded the International IEEE Award for Continuing and Significant Contributions to Applied Superconductivity, and in 2013 she was named `Woman of the Year’ by the NSW Government.

Dr Foley has a passion for advancing scientific research and has held various roles, including member of the Prime Minister’s Science, Engineering and Innovation Council, President of the National Executive for Australian Institute of Physics, President of Science and Technology Australia, Editor-in-Chief of Superconductor Science and Technology journal, and Council Member for Questacon.

Dr Foley is a strong advocate for women in STEM and is committed to tackling gender equality. As a leader in CSIRO, she is working to enhance collaboration across the sector and turn more world-class research into benefits for the nation.